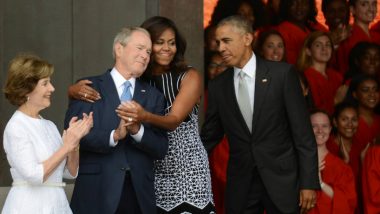 Twitter has got some fantastic frenzied weekend this time. George W. Bush passing candy to Michelle Obama—since the time the footage has been uploaded, netizens just cannot stop talking about it. And it will not be surprising at all to know that the instant eye candy moment is the next major BFF GIF and memes. At the former United States Senator John McCain’s Washington D.C. funeral, we saw bringing politicians together on both the sides of the aisle. But among the emotional words shared and the tears shed, this sweet glimpse of former US President Bush and former First Lady, Michelle Obama has led Twitterati coming with funny reactions. The combined responses surfacing on social media has up the friendship goals! Laura Bush Gives Candy to Michelle Obama Via George W Bush at Memorial Ceremony For John McCain.

While President Bush might have been at odds with President Obama during his presidency, they both looked like they had put all of that behind them during the funeral on Saturday, September 1. Both of them, who was invited to speak at the long time Senator’s memorial; were seated next to each other. In the footage straight from the funeral, President Bush can be seen passing what the internet seems to think is a church candy or a mint to Michelle Obama. She smiles and whispers, “Thank you,” and the whole exchange at the affair is warming the internet’s heart!

WATCH: Bipartisanship: Laura Bush, via President Bush, hands a piece of candy to Michelle Obama during the memorial service for John McCain. pic.twitter.com/PhKPYCOiUz

A person who passes you candy like that is a true friend. #McCainMemorial https://t.co/YHybwhc4IX

"George, ask if they want some candy..." https://t.co/dqpzPBPmr8

But hey, did you miss President Obama’s look?

The best is the look from President @BarackObama: "What, *I* don't get a mint?" https://t.co/vEoqDxtgF1

Obama with an "am I going to have to separate you two?" look. https://t.co/teJmhqwMXb

If we go by reports, the two have been known to share genuine friendly moments when appearing together. Bush was quoted in an earlier interview answering to a question related to the former US First Lady, “She kind of likes my sense of humor.” He further adds, “Anybody who likes my sense of humor, I immediately like.” Putting the jokes aside, seeing opposing political leaders on the same page and being friendly towards each other is so refreshing. We can see it as a gentle reminder to treat even political opponents with politeness and respect, which thankfully includes passing a piece of candy to satisfy a dry throat.

(The above story first appeared on LatestLY on Sep 02, 2018 09:35 AM IST. For more news and updates on politics, world, sports, entertainment and lifestyle, log on to our website latestly.com).