While the nation mourns the death of the animal, renowned sand artist, Sudarsan Pattnaik also shared his disappointment over the tragic incident. Through his sand art that depicts the dead mother and her baby elephant, Pattnaik said, “Humanity has failed again.” The picture evokes human cruelty against animals. 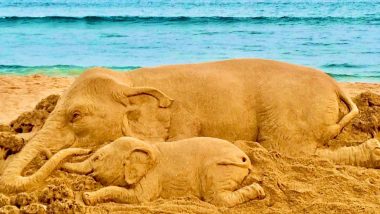 An elephant died in Kerala. According to reports, the animal was pregnant, and she passed away after she ate a pineapple filled with firecrackers, allegedly left by some locals. The fruit exploded in her mouth, leading to the tragedy. This shook the nation. People have been rallying on social media, calling for justice for the elephant. No arrest is made yet. While the nation mourns the death of the animal, renowned sand artist, Sudarsan Pattnaik also shared his disappointment over the tragic incident. Through his sand art that depicts the saddening death of mother and her baby elephant, Pattnaik said, “Humanity has failed again.” The picture evokes human cruelty against animals, urging citizens to save elephants. When Elephants Saved Humans! These Moving Instances of Jumbos’ Bravery Rescuing People From Tragic Situations Will Inspire You to Become Better Person!

The incident came to light after a forest officer narrated the details of the horrific death of the elephant on social media. The 15-year-old wild elephant had left the forest of Silent Valley in Pulakkad district, wandering into the nearby village in search of food. She ate the pineapple which was filled with crackers by locals. Animal rights activists and commoners have come together online, amid the lockdown, calling for the perpetrators to be identified sooner and punished. HORRIFYING! Pregnant Elephant's Death After Being Fed Pineapple Filled With Crackers In Kerala Is New Low For Humanity, Furious Netizens Demand Justice For The 'Mother and Baby.'

Pattnaik in his sand art has made two elephants—an older one and a baby, depicting the animal who was pregnant and had such a tragic death. He rightly captioned the sand art picture saying, “Humanity has failed again. One of my SandArt on save #Elephant.”

He is right; this is not the first time when humanity has failed. Cruelty towards animals has very often been reported in India. Another report came in of a young female elephant who reportedly died in April in a similar manner in the forest in Kollam district, Kerala. A post-mortem shows the elephant suffered jaw fractures and forest officials suspect the animal had died in the same way, by consuming crackers.

(The above story first appeared on LatestLY on Jun 04, 2020 01:23 PM IST. For more news and updates on politics, world, sports, entertainment and lifestyle, log on to our website latestly.com).