He placed the battery into his mouth and bit down which caused it to burst into flame. The move immediately proved to be a mistake, as the battery explodes. 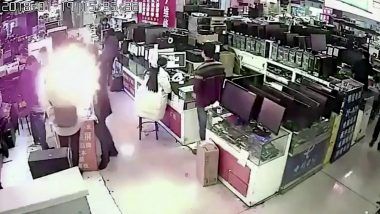 A video of a man at an electronic store in China went viral. He decides to verify his smart phone’s battery and he bites it! He placed the battery into his mouth and bit down which caused it to burst into flame. Security camera footage of January 19 at the store in Nanjing City, Jiangsu Province, shows the unidentified man biting into the iPhone battery, to check its authenticity.

According to Taiwan News, the person was in the store to replace his iPhone battery. He began to look closely at the battery to check if it was real, decided to bite down causing the explosion. The move immediately proved to be a mistake, as the battery explodes. Even though the blast was inches from the man’s face and other spectators, fortunately no one was injured. But many in the store were startled by the sudden flareup.

A video of the incident was captured on the store’s security cameras which has gained over 5 million views that was uploaded on April 20 at maiopai.com, a Chinese video sharing platform.

Apple had to cope with a handful of reports about exploding iPhones in recent years. For which they came up with a battery replacement program offering discount around the world. There has been an influx of customers at the Apple stores to replace their batteries.

While it is true that faulty batteries may sometimes explode or simple over heat, but the method of testing it was pretty suspect. We do not know whether the battery blew up because it is fake, or he damaged it with his teeth. The incident states one lesson to be learned: never bite your electronics.

(The above story first appeared on LatestLY on Jan 24, 2018 07:19 PM IST. For more news and updates on politics, world, sports, entertainment and lifestyle, log on to our website latestly.com).