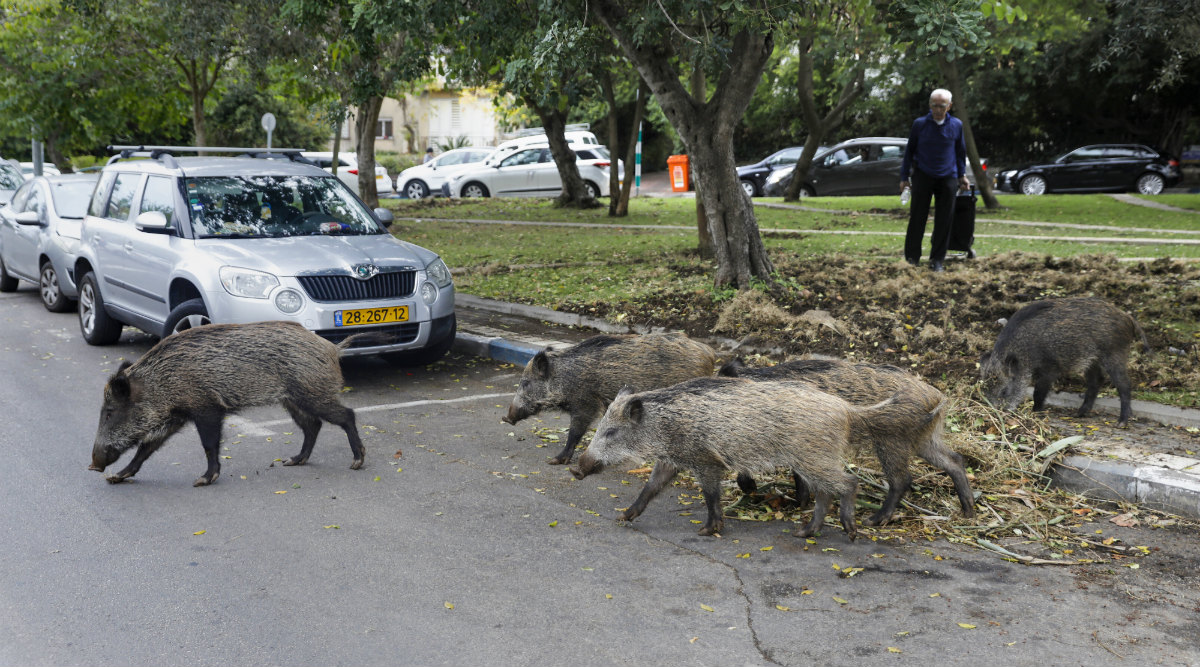 Haifa, December 16: A man approaches a group of wild boars rooting up roadside grass in Israel's Haifa, shoeing them away -- but after lazily trotting a few steps, they resume their activity.

Dozens of the beasts have taken up residence in the northern coastal city since it banned culling them.

The wild pigs rip up vegetation and rummage through bins, sparking a fierce debate between animal rights defenders and those in favour of driving them out or killing them.

The city nestles at the foot of the Carmel Mountains, home to boars, foxes, jackals and other animals, all protected by Israeli law. Boars have long entered Haifa at night looking for food and water.

But residents say in recent months they have been increasingly brazen, blocking traffic, digging up public gardens and even overturning large refuse bins.

Haifa mayor Einat Kalisch-Rotem has defended the ban on killing them, saying they are part of nature.

When AFP visited, a group of boars crossed a road in mid-morning, unbothered by traffic or the film crew following them. One amorous male even mounted a female in a public garden.

"They've turned our lives into a nightmare," one woman shouted.

Ilana Dihno, Haifa resident and one of the organisers of a protest against the boars later this month, said the animals used to stay out of the city until nightfall.

"Now they are walking around in broad daylight," she said.

"We chose to live in a city, but we live in a jungle."

Boars, a species of wild pig found across Europe, Asia and North Africa, can grow up to two metres (more than six feet) in length -- although most are smaller.

They primarily feed on plants, berries and fruits but are adept scavengers and thrive on human leftovers.

In Haifa there have been no recent cases of them attacking people, but some residents are concerned.

"They come to our houses and gardens. We're scared for our children," said a woman who gave her name only as Avital.

"Some kids might scare the piglets which might aggravate (the older boars) and make them attack children."

She wanted to see the animals forced from the area completely, saying the municipality had done "nothing".

Other residents take a more favourable view of the creatures.

Sarit Shai admitted to feeding the animals, saying they had been displaced by human activity.

"They are looking for a place to be," she said. "They were here before us."

Erez Kaplan, a gardener, said the pigs were "harmless" and damage they did to gardens could be easily repaired.

"They check the ground and when they find it wet, they believe there's water, so they start digging," he said.

Haifa, Israel's third-largest city with around 300,000 people, is mainly Jewish with a significant Arab minority.

Both Jewish and Islamic religious rules ban the eating of pigs, including boars.

They have no natural predators in Haifa, so their numbers can grow rapidly.

Until Kalisch-Rotem's 2018 victory, the city periodically allowed hunters to shoot them to keep numbers down, said Shlomit Shavit, a spokeswoman for Israel's nature and parks authority.

But the new leftwing mayor banned the cull.

She has called for other solutions to keep the animals outside the city, such as ensuring they have regular food supplies in the wild.

Haifa municipality has also sought to encourage tolerance of the animals, publishing a song on its Facebook page in which a group of children profess their love for the boar.

"A Haifa girl isn't afraid of two tusks and hair like a brush, she says good morning to the neighbourhood boar," the song goes.

Municipality member Raja Zaatry said the city was divided on the issue of the boars but that the mayor's culling ban was based on her humanitarian convictions.

The animals, he said, had been victims of human expansion.

Shavit said the parks authority was working with the municipality to find solutions.

"We are educating the population that they should not feed these animals, and they should close rubbish bins because feeding them they encourage them to come," she said.

"When the pig finds a ready-to-eat food supply it does not go in search of food in its natural habitat."