After pictures of PM Narendra Modi wearing the special ultraviolet protection eyeglasses surfaced on social media, a war of words erupted on Twitter on which brand of shades the Prime Minister wore while watching the Solar eclipse. 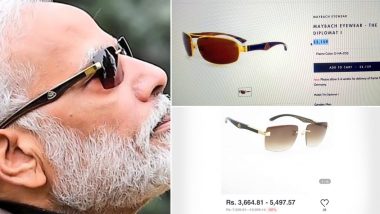 New Delhi, December 26: Prime Minister Narendra Modi on Thursday said that he caught a glimpse of last Solar eclipse of 2019. After pictures of PM Narendra Modi wearing the special ultraviolet protection eyeglasses surfaced on social media, a war of words erupted on Twitter on which brand of shades the Prime Minister wore while watching the Solar eclipse. Twitterati were divided whether PM Modi wore sunglass of Maybach or Retro Buffalo Horn brand. PM Narendra Modi Reacts to Memes on His Solar Eclipse 2019 Photos, Says 'Most Welcome...Enjoy'.

Critics of PM Modi claimed that Prime Minister wore a shade of Maybach brand which costs over one lakh. However, supporters of PM Modi said that he wore Retro Buffalo Horn brand's sunglass priced at between Rs 3000 to Rs 5000. The two factions shared pictures of PM Modi wearing a shade and screenshot of online price of Maybach and Retro Buffalo Horn sunglasses. Solar Eclipse December 2019 Pics and Videos: Netizens Share Glimpses of The Last Surya Grahan of The Year.

Was PM Modi Wearing Shade of Maybach? These Twitter Users Think So

First, there will be a solar eclipse & I will watch it with my $1,995 Maybach luxury sunglasses

Second, there will be a huge outrage by Urban Naxals

Finally, will auction my glasses which my crony from Gujarat will buy

If you are living a German dream, see it through German sunglasses. Maybach Worth 1.6 Lac #BrandedFakeer pic.twitter.com/3pgVsfA1di

They are not Diplomat 1 series glasses.

They are Retro Buffalo Horn costing from ₹3K to ₹5K.

Earlier today, in a tweet, PM Modi said that he was unable to enjoy the Solar eclipse that was to be partially visible from the national capital due to a "cloud cover", but managed to catch a glimpse of the astronomical event. The rare celestial spectacle started at 8:17 am and lasted till 10:57 am in Delhi.

"Like many Indians, I was enthusiastic about Solar Eclipse 2019. Unfortunately, I could not see the Sun due to cloud cover but I did catch glimpses of the eclipse in Kozhikode and other parts on live stream. Also enriched my knowledge on the subject by interacting with experts (sic)," Modi tweeted, attaching the pictures of himself trying to view the annual solar eclipse through the special ultraviolet protection eyeglasses and images of live stream from Kozhikode.

(The above story first appeared on LatestLY on Dec 26, 2019 02:18 PM IST. For more news and updates on politics, world, sports, entertainment and lifestyle, log on to our website latestly.com).