The final event of Russia's 'Miss Penal System Contest 2021' for beautiful female prison wardens will take place in Moscow on June 11, 2021. The authorities have now unveiled the pictures of the 12 finalists. 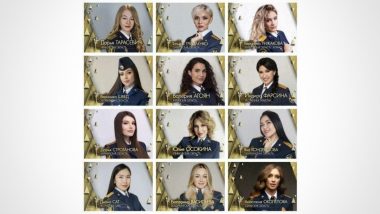 Russia’s Federal Penitentiary Service has organised ‘Miss Penal System Contest 2021’ for beautiful female prison wardens. They have also released the list of the final candidates for its annual Miss Penal System contest. Out of several contestants, 12 of the country’s beautiful prison guards are currently competing against each other as the voting is underway. Out of the 12 gorgeous Russian prison guards, one will bag the crown. According to the Russia Today report, around 100 contestants participated in the local competition and out of which only 12 have been selected for the final round.

They will receive votes from June 7 to June 11, 2021. After counting the votes, the name of the winner will be announced.  The final event will take place in Moscow on June 11, 2021. The beautiful female contestants come from all over the country, including Sakhalin in the Far East and Murmansk in the far north. However, the Russian Federal Penitentiary Service is not the first government agency to organize a beauty pageant to promote its work. In 2019, when the National Guard held the ‘Beauty of Rosgvardia’ pageant, police officer Anna Khramtsova won the competition.

However, Khramtsova enjoyed her victory for few days and later she was fired after she posted a video on Instagram from inside a Rosgvardia facility. According to the authorities, she was fired for breaching security.“The competition I won only aggravated everything, and now there is a prejudiced attitude towards me,” Khramtsova said.

Check Out the Pictures of the Current 12 Finalists of Russia’s ‘Miss Penal System Contest’ Here:

You can view all the 12 finalists' profiles along with their photos here on the official website.

This is not the first time the Federal Penitentiary Service has stunned everyone with the beauty pageant. Last month, a prison in Russia’s Novosibirsk city had revealed that they had installed British-style red phone boxes to decorate the room of the inmates so that they can make a call to the outside world.

(The above story first appeared on LatestLY on Jun 10, 2021 04:29 PM IST. For more news and updates on politics, world, sports, entertainment and lifestyle, log on to our website latestly.com).