In one of the most bizarrely hilarious incident to end the year 2020 took place in Pakistan's Peshawar, leaving netizens in splits as they try to comprehend why exactly someone would dress up in scary bat-like attire that also resembles a wolf to scare off people. 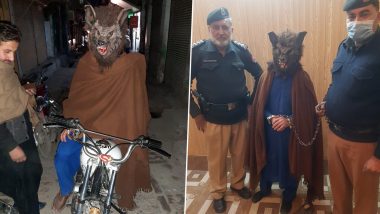 In one of the most bizarrely hilarious incident to end the year 2020 took place in Pakistan's Peshawar, leaving netizens in splits as they try to comprehend why exactly would someone dress up in scary bat-like attire that also resembles a wolf to scare off people. Yes, a man dressed up in an incomprehensible attire on New year's eve in Pakistan only to be arrested by the police personnel in Peshawar thought it was okay to go out and try scaring people as if it was Halloween.

However, it is the picture of the man that has gone viral on social media with people coming up with funny reactions. While some are calling him the bat that started the whole coronavirus pandemic, some think of him as the wolf from the fables that has come alive to scare people. However, the costume looks funny more than anything else and netizens have united to make funny memes and jokes. Take a look at the pictures that are going viral:

Police in the Pakistani city of Peshawar arrest a young man on New Year’s eve - for wearing a costume mask to scare people pic.twitter.com/sU9f1NDcAf

As netizens saw the pictures of man, instead of being scared, they couldn't contain their laughter. Check out hilarious reactions the pics received that can be the perfect memes to bid 2020 goodbye:

When your New Year's plans are busted. pic.twitter.com/nED88jD85w

Breaking: The bat which resulted in the Index case of #coronavirus has finally been apprehended on the final night of 2020, one of the most terrible years in human history. #COVID19 #NewYearsEve pic.twitter.com/p9LSIc71GW

Maybe he was confused about the kind of mask to wear! And he was only trying to protect people 🥺

This looks like a scene from a Wes Anderson movie

This below doesn't seem like something to be arrested over!

By the way when the police interrogated him last night, his statement in self defence was: “I was wearing the mask as part of the SOPs to protect myself from the Corona Virus” https://t.co/ZlXaM7N6uO

However, not everyone was in the mood to joke. Some thought that the police went a little too far if they arrested someone just for wearing a mask on NYE while some thought there are bigger issues to focus on event nights like NYE than a young man who was probably having fun with the mask. Some Twitter users also mocked the Pakistan Prime Minister Imran Khan and labelled the incident as the example of "Naya Pakistan".

(The above story first appeared on LatestLY on Jan 01, 2021 02:01 PM IST. For more news and updates on politics, world, sports, entertainment and lifestyle, log on to our website latestly.com).