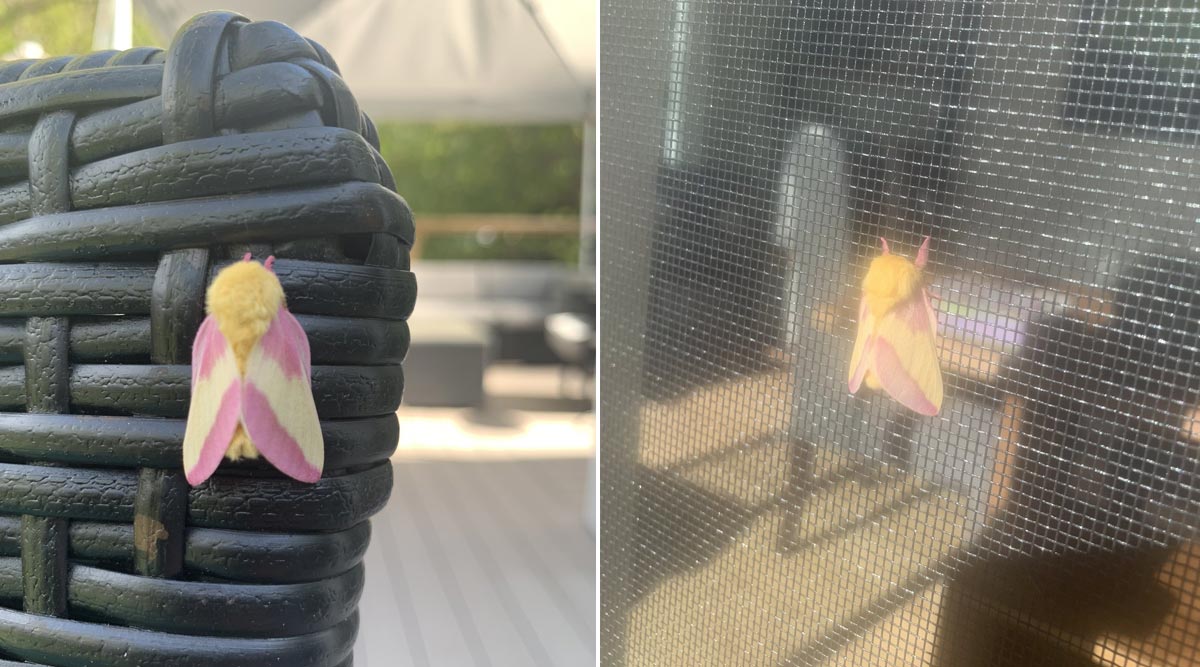 Yes, the current situation is horrific, but other beings are benefitting from the lockdown. While the humans are confined at their homes, animals, birds and bugs are coming out from their hidden spaces and exploring empty streets and roads. We have had an entirely unexpected number of visitors over the past few days, this Twitter user @reblavoie was enthralled to see a beautiful pink and yellow-hued bug, resting on her deck. While we are used to seeing all manner of moths and butterflies visiting our gardens, this species outshines the rest. Widely known as the rosy maple moth or candy floss moth, its scientific name is Dryoncampa rubicunda. The twitter thread capturing the beauty of this cutest bug on the planet has mesmerised the netizens. 13 Instances of Animals and Birds Roaming Freely During Coronavirus Lockdown From Around The World.

The rosy maple moth is a small North American moth in the family of Saturniidae, also known as the great silk moths. The species is famous for its woolly body and pink and yellow colouration, which varies from cream or white to bright pink or yellow. Twitter user, Rebecca Lavoie, was surprised to see this beautiful creature resting at her deck. “This moth exists in nature and it’s ON MY DECK,” she captioned her tweet. Animals Reclaiming The World in Photos & Videos: From Leopard in Hyderabad to Gaur in Assam, 5 Instances of Wild Animals in India on The Loose.

View Pic of the Cutest Moth on Earth!

This moth exists in nature and it’s ON MY DECK pic.twitter.com/frBXkvav3d

Just like you, Rebecca’s followers on Twitter was completely blown away. Soon the picture of the beautiful candy floss moth went viral, as people tried to identify from which species the bug belongs.

What is It Called?

oh my days it looks like something a child would draw....what's it called?

What an absolute strawberry-banana milkshake of a moth

I once found this guy on a neighbor’s car and stopped to take this pic. The owner came out asking me what the heck I was doing. I pointed to this Luna moth and he was okay with my taking a picture note how big it is! These were large SUV tires! pic.twitter.com/PQLKZXDxFh

In the follow-up tweets, Rebecca explained that it is a Rosy Maple Moth, and there is not one, but she had two visitors at her house.

There Are Two of Them

Update: Now there are TWO of them! pic.twitter.com/VzlBEEnRts

It is called the rosy maple moth because of the colour scheme of its body, which has sections that are rosy pink in hue, as well as its preferred habitat. They like to live in maple trees, just as the common name of the species implies. Isn’t it beautiful? Once you see it, chances are you will never forget it, thanks to its magnetic reminiscent of a pink lemonade-inspired colour palette!