Animals Reclaiming The World in Photos & Videos: From Leopard in Hyderabad to Gaur in Assam, 5 Instances of Wild Animals in India on The Loose

Pictures and instances of animals reclaiming the world or as some put it, the earth is healing have inundated on social media. But India has recorded a lot of wild animals on the loose! Be it leopards or tigers, wild animals have been recently spotted a lot more than before. We have got you a compilation of such instances from India. 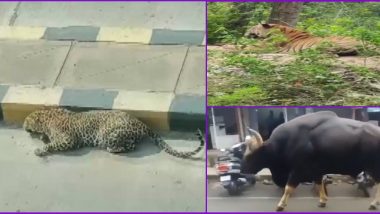 Ever since a lockdown has been imposed because of Coronavirus spread, we have read and seen so many instances of animals, birds, reptiles taking to the streets from around the world. Places that were usually crowded with people are now seeing animals and birds enjoying their freedom. Pictures and instances of animals reclaiming the world or as some put it, the earth is healing have inundated on social media. But other the seemingly harmless ones like sheep, peacocks, dolphins and other spottings, India has recorded a lot of wild animals on the loose! Be it leopards or tigers, wild animals have been recently spotted a lot more than before. We have got you a compilation of such instances from India. Animals Reclaiming The Earth: 13 Instances of Animals and Birds Roaming Freely During Coronavirus Lockdown From Around The World (Watch Viral Pics And Videos).

India is right now in its third phase of lockdown and seeing the growing number of COVID-19 cases, it is bound to increase further. So as humans continue to stay indoors, the animals from the wild are peeking out. Back to back, there have been reports of leopard, civet and tiger spotted on the streets in the Southern states of Telangana and Karnataka. Which brings us to other wild animals too which have been in the country in very recent times. Let us look at wild animals in India.

On May 14, a leopard was found sitting in the middle of a road in Mailardevpally in Hyderabad. The officials began their efforts for its safe rescue but he went away. The police officers used drone cameras to spot it in the vicinity but it could not be found. It is said to have escaped into the woods after it attracted much attention and chaos from the locals.

Check the Pics and Video Here:

Telangana: A leopard was spotted sitting at Kattedan underbridge near Mailardevpally Police Station in Rangareddy district today morning. It later escaped into a nearby open space before it could be caught. A rescue operation by Police and forest officials is underway. pic.twitter.com/MJVQ9qC3Lt

A civet was found trapped in the Fateh Darwaza of the Golconda fort on the same day. It created panic as some people called it a black panther. However, it was later confirmed that the animal was a civet and it was rescued by the staff of the Nehru Zoological Park as reported in Deccan Chronicle. This is also not the first appearance of the civet, one had been seen in Kerala too.

On May 15, a tiger was spotted on the roadside in the Titimati forest zone in Virajpet taluk of Kodagu district. This forest zone is located 214 km from the state capital Bengaluru. Further details about whether it was rescued are not available as yet. Uttar Pradesh: Furious Tiger Attacks Locals in Pilbhit by Climbing Over a Tractor, 3 Critically Injured, Watch Video.

Check the Pic of Tiger Here:

Karnataka: A tiger was spotted on the roadside in Titimati Forest Zone in Virajpet taluk of Kodagu district today morning. pic.twitter.com/K4rZcjOrRb

Looks like the city is really becoming a hub for wild animal appearances. After leopard and civet, a Twitter user shared a sighting of a long python on the road. As per reports, this huge snake was spotted in the Vijay Nagar colony and the police were informed. Necessary steps have been taken for its rescue.

4. Gaur in Mangaluru and Assam

Indian bison or Gaur have also made their appearance during in two separate instances during this lockdown in India. Last week, two wild gaurs had strayed their ways and spotted in the city of Mangaluru. While they did not cause any trouble, the one in Assam created mayhem. The bison came out from Nambor-Doigrung Wildlife Sanctuary in search of food and created chaos in the nearby village. A lot of locals also gathered to get a glimpse of this giant animal. The situation was thankfully brought under control by sedating the animal and taking it back home.

Here's Video of Gaur in Streets:

Indian Bison( the gaur) goes for a street walk😊

The largest extant Bovine, is native to South & SE Asia. Can be very aggressive. Rare to see in markets😐 pic.twitter.com/z4AYNpeUQt

Delhi has also seen two instances of Nilgai taking to the streets. Nilgai, or Blue Bull, was spotted roaming on the Ashok Marg outside the Great India Place Mall in Sector 38A in March. At another time, a herd of them was spotted near the Delhi airport! Pics of them were shared on social media and Twitterati once again enjoyed the "earth is healing" jokes.

Nilgai near IGI Airport in #Delhi #environment is getting cleaner day by day pic.twitter.com/cfQTTnsyzI

These are some of the instances which we have gathered of wild animals seen in India. As nice as it seems, it is also dangerous to have the wild cats roaming close to city spaces. Have you encountered or heard of any of such wild appearances in and around your towns? Do let us know in the comments section.

(The above story first appeared on LatestLY on May 15, 2020 04:28 PM IST. For more news and updates on politics, world, sports, entertainment and lifestyle, log on to our website latestly.com).