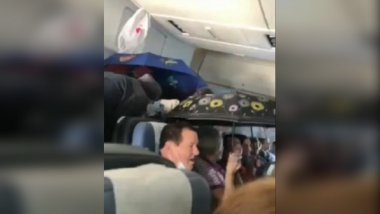 A bizarre incident came to the fore in which several passengers seated in a passenger flight opened up their umbrellas onboard. The reason behind them using the rainy season gear was to prevent themselves from getting wet. All this on a moving flight sounds strange? Yes it does. But the rare incident occurred in a domestic flight in Russia. Disgusting! Passenger Dries Shoe Using Flight's Air Vent, Netizens Are Shocked (Watch Video).

Passengers of the Rossiya Airlines flight, that was travelling from the Siberian city Siberian city of Khabarovsk to the resort town of Sochi, were in a shock when water started dipping on them from the ceiling of plane.

The flyers could be seen opening up their umbrellas in bid to prevent themselves from getting drenched. Some of those onboard also used their mobile phones to capture a clip of this once-in-a-lifetime incident.

Watch Video of  'Rains' Inside a Plane

The timely action by cabin crew members prevented the passengers from panicking. The travellers were calmed down by informing that the water was dripping not due to rains outside, but due to a malfunction in the centralised air conditioner system.

In case of a centralised AC, warm air coming in close contact with the cooling surface can lead to dripping of water. In this case, the dripping was so excessing that it began pouring like rains.

(The above story first appeared on LatestLY on Jul 12, 2020 10:18 PM IST. For more news and updates on politics, world, sports, entertainment and lifestyle, log on to our website latestly.com).