Shocking! Dragon-like Blue Sea Creatures Show up on Cape Town Beach! Know More About 'The Most Beautiful Killer in the Ocean' (Watch Video)

South African beach had about dozens of bizarre, blue poisonous sea creatures washed up to the shore, making up for a shocking, never-seen-before view for passers-by. 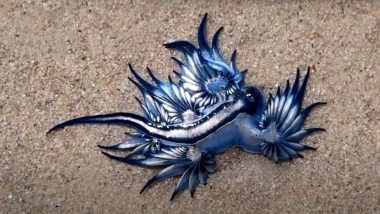 South African beach had about dozens of bizarre, blue poisonous sea creatures washed up to the shore, making up for a shocking, never-seen-before view for passers-by. These magnificent looking creatures were discovered at a beach in South Africa, near cape town.  They are colloquially called the blue dragons that are a strangely beautiful looking shell-less molluscs known as “the most beautiful killer in the ocean”. Is This the Loch Ness Monster? Viral Photo of Giant Sea Creature From Scotland Sparks Debate Online, Twitterati Speculate Its ‘Nessie’.

They were first found in the sand near Cape Town by a local grandmother, Maria Wagener who found the while she was taking a stroll on the coast. She saw a group of about a dozen "smurf-like sea slugs" that looked like a mix of lizard and an octopus.  These sea creatures are known to be poisonous and are said to be Glaucus atlanticus, which are a type of sea slug. They are also called the sea swallow and the blue angel

The granny said to the UK Sun: "I probably would have put them back in the sea if I’d had something to lift them — but no, I didn’t touch them! I pick up starfish all the time and put them back into the sea but I had a feeling that these would have a sting."

They are known to feed on deadly Portuguese man o’ war and other venomous aquatic critters. Their sting is known to cause nausea, pain and vomiting. Wagener, who shared photos of the creatures on her Facebook page, said the tide likely washed them back out to sea.

Recently a squirming sea creature had washed up on Texas beach found by Holly Grand from the Texas Parks and Wildlife Department during a routine survey of the marine life at Nighthawk Bay. Footage shared by the department, which shows the creature squirming around in the hand of a member of staff.

(The above story first appeared on LatestLY on Nov 29, 2020 02:49 PM IST. For more news and updates on politics, world, sports, entertainment and lifestyle, log on to our website latestly.com).