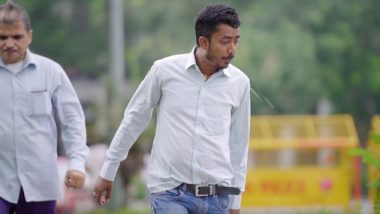 Mumbai, October 1: A day before Gandhi Jayanti on Wednesday, a unique hashtag #ThukMat which means 'Don't Spit' in English was trending on Twitter. The consumption of gutka, pan masala, raw betel nut (tamul) is a frequent habit among many and people have the habit of painting the town red, quite literally. The hashtag #ThukMat is part of the campaign to promote EzySpit's new product that can turn your spit into a semi-solid biodegradable waste while converting it into a fertiliser that can enhance plant growth.

People are lauding this wonderful initiative on Twitter which promotes the message of stop spitting in public places. The message is in line with Narendra Modi government's 'Swachh Bharat' mission. The campaign comes with a peppy rap song that tells people not to spit anywhere and everywhere and then put the blame on the government that the latter is not doing anything to keep the city clean. The viral ad campaign promotes the use of keeping EzySpit pouch and tins with and to spit in those. Narendra Modi Receives 'Global Goalkeeper Award' For Swachh Bharat Mission From Bill And Melinda Gates Foundation.

This Nagpur based start-up has developed a product that solidifies any liquid waste into the material within seconds while killing bacteria and in 3-4 days, this solid gets converted into fertiliser. They have introduced the world's first Spit Pack, Liquid Disposal bin and EzyVomit bags. The use of these pouches, can save millions of litres of water wasted every day to scrub off spit stains from staircases, roads and other public places.

Listen interview of Young Engineers @iRituMalhotra & Prateek (Who are working against spitting issues ) on @FeverFMOfficial at today 9 AM. To Support PM @narendramodi 's @swachhbharat Campaign they are also releasing a song today #ThukMat pic.twitter.com/XFgRz3w55F

These products come at a minimal cost, the pouch is priced at Rs 5 and can hold up to 15 spits, while the Rs 10 spit glass for cars can be used for spitting 30 times. The liquid disposal bins, suitable for kitchens is priced at Rs 50, and one can get 25 kg of homemade fertiliser.

(The above story first appeared on LatestLY on Oct 01, 2019 11:36 AM IST. For more news and updates on politics, world, sports, entertainment and lifestyle, log on to our website latestly.com).