TikTok Ban by Donald Trump Temporarily Blocked in the US: Netizens Share Funny Memes and Reactions on Twitter 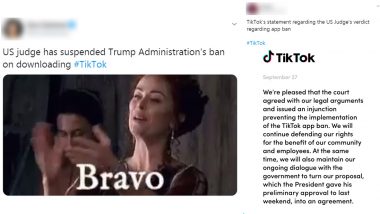 As per the latest update on the TikTok ban in the US, the federal judge has blocked orders from the President Donald Trump's administration put a hold the ban on TikTok from being downloaded from U.S. app stores. The terms of a deal to create a U.S.-based TikTok Global still remain in flux with ByteDance, Oracle and Walmart still needing to finalize the ownership structure of the new entity. Since the app is not being banned in the current moment, TikTokers are happy and are sharing funny memes and jokes in celebration. Twitter is filled with updates and reactions on The stay at the TikTok ban from the Trump administration.

So the answer to the question if TikTok officially banned in the US still remains no at least temporarily. U.S. District Judge Carl J. Nichols, who was appointed to the bench by Trump in 2019, was not expected to make public his full ruling until Monday. He filed his decision publicly, but his full reasoning was filed separately as a sealed document. Netizens are celebrating the move, at least temporarily and are sharing funny memes and jokes on Twitter. Check out:

TikTok said in a statement: "We're pleased that the court agreed with our legal arguments and issued an injunction preventing the implementation of the TikTok app ban. We will continue defending our rights for the benefit of our community and employees. 'At the same time, we will also maintain our ongoing dialogue with the government to turn our proposal, which the President gave his preliminary approval to last weekend, into an agreement.

(The above story first appeared on LatestLY on Sep 28, 2020 09:13 AM IST. For more news and updates on politics, world, sports, entertainment and lifestyle, log on to our website latestly.com).