Vodafone and Idea rebranded itself into a new identity-'Vi' (pronounced as we) on Monday. In order to announce their new brand identity, the brand has released an ad. 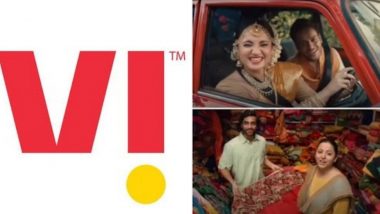 Mumbai, September 8: Vodafone and Idea rebranded itself into a new identity-'Vi' (pronounced as we) on Monday. In order to announce their new brand identity, the brand has released an ad. The creative however is being bashed online and netizens are finding it irritating and uninspiring.

Vodafone India and Idea Cellular, which merged in August 2018. The new logo of the company shows- an inverted ‘I’ of Idea which has been integrated with the ‘V’ of Vodafone and the red colour of Vodafone’s previous logo has been retained. Vodafone Idea Rebrands Itself as Vi; Fresh Logo, Signage of New Brand Identity to be Put Up at Various Stores And Service Centres.

The ad has been conceptualised by Ogilvy & Mather. The music in the ad film is by Rupert Fernandes.

Here are people sharing disappointment at the creative:

The new spot announcing #VI, the new Vodafone+Idea brand is uninspiring. It is pretty irritating and putting it on loop on all channels does not help.

Vodafone had come out with some solid commercials with the pug. 'What an Idea, sir ji' was good.

Which agency did this one? pic.twitter.com/owUttUj2nK

Here's another Twitterati referring to the ad as torture

The most annoying ad award should go to Vi ads.@WIONews @palkisu Please have some mercy and stop it.

Is this a new marketing strategy by Vodafone and Idea to come up with a torture?? pic.twitter.com/mAHSc0BG11

This user wants to switch to another network after being fed up of the new ad:

I am delighted for your merger with idea "VI" and hope for better service now.

But looking at your irritating new ad after every two minutes is making me prone to switch into a mew network.

Vodafone Idea, which faces a payment of more than Rs 58,000 crore as tax after a Supreme Court verdict, has only paid Rs 7,850 crore Adjusted Gross Revenue (AGR) dues till date. The telco will have to pay nearly Rs 1,128.4 crore as AGR dues every quarter for the next 10 years.

(The above story first appeared on LatestLY on Sep 08, 2020 02:05 PM IST. For more news and updates on politics, world, sports, entertainment and lifestyle, log on to our website latestly.com).