The girls noticed that pet Cubby kept getting out from behind closed doors, but they were not able to figure out how. 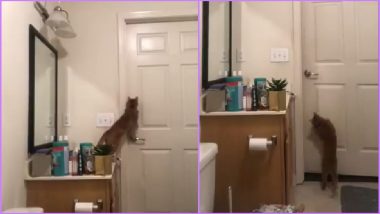 Watching funny cat videos are everyone’s favourite pastime these days. Ask anyone! Hilarious viral clips of the feline buddies bring people together on the internet. So, it is no surprise when a criminology student Aliyah Steele shared footage of her roommate’s cat who sneakily unlocked the bathroom door and went out. Naturally, the video went viral, and cat owners on Twitter soon joined in on the fun by sharing their own hilarious experiences with their pets. Felines are intelligent, and the recent line of videos online mainly explains why and how. Surprised by the Money Karl Lagerfeld's Pet Cat Choupette Inherits? Meet 5 Pet Animals Who Own a Fortune!

Aliyah, who was brought up in Texas, is a currently a senior at the University of West Georgia studying criminology, reported BuzzFeed News. She moved in with her roommate Ciara Davis and her cute pet Cubby Jay. Recently, the girls noticed that Cubby kept getting out from behind closed doors, but they were not able to figure out how. Aliyah landed on an experiment. She set up her phone to record the door on Cubby in the bathroom. This Video of a Pet Dog and Cat Loving Each Other is Going Viral.

Watch Video to Find Out What Amazed Aliyah

My roommate’s cat is always breaking out of her bathroom. I set up this hidden camera to find out how...and y’all....i- 😂💀 pic.twitter.com/AUDN9IWPNE

That is one smart kitty! Cubby escaped in less than five minutes. The video above shows the cat purr before he jumps on a wooden dressing table. Resting its front paw on the door handle, the bright kitten figured out his next move. “Once he got out, we gave him a treat and watched the video,” Aliyah explained via Twitter. This Cat Hiding in Christmas Tree is Difficult to Find.

The video so far received more than 3 million views (still counting) on Twitter. As the tweet reached out to many more netizens, the cat owners on the social media platform decided to respond by sharing how they have caught their pets in equally impressive stunts. Yes, you are not alone!

this is all my tall ass cat has to do😂 pic.twitter.com/V6u3TLwJP3

This One is A Pro

My cat is known for opening drawers and turning on the water faucet. 🤣 pic.twitter.com/F6m9BIzoY4

Watch it Till the End!

IM IN FUCKING TEARS. MY MOM AND I WANTED TO SEE HOW KIKI TRIES TO OPEN THE DOOR SO I SET UP MY PHONE TO RECORD HIM AND THIS IS WHAT HE DID pic.twitter.com/q2uJqVGYq4

Pets are definitely much more intelligent than we might realise. If you haven’t, hide a camera to capture your pet how easily it can find its way out of any room while the door is closed. Be amazed watching how smart your feline bud could be.

(The above story first appeared on LatestLY on Feb 24, 2019 03:58 PM IST. For more news and updates on politics, world, sports, entertainment and lifestyle, log on to our website latestly.com).