Sunrisers Hyderabad have grown as a franchise under David Warner's captaincy in the past and also won their only title so far under the Australian's leadership in 2016. However, things haven't been going his way this season as he was removed from captaincy first and then dropped from the side following poor performances with the bat in hand.

David Warner's absence from the Sunrisers Hyderabad (SRH) squad has been one of the main talking points around their match against Rajasthan Royals on Monday. The Australian opener was earlier stripped off the SRH captaincy after a poor start to this years' IPL with Kane Williamson replacing him. However, with the southpaw not finding form at all even in the UAE leg of IPL 2021, he was dropped from the squad to play against Rajasthan Royals. Post this development, it came into the light that he was not even present at the stadium and when a fan enquired about this on Instagram, Warner replied saying, "Unfortunately won't be again but keep supporting please." This indicates that his time at SRH might have come to an end, which opens  up the possibility of him entering the mega auctions next year.

Warner was also seen uploading Instagram stories of him watching SRH's match where Jason Roy and Kane Williamson both struck fifties to help the 2016 champions register their second win this season.

Take a look at this below: 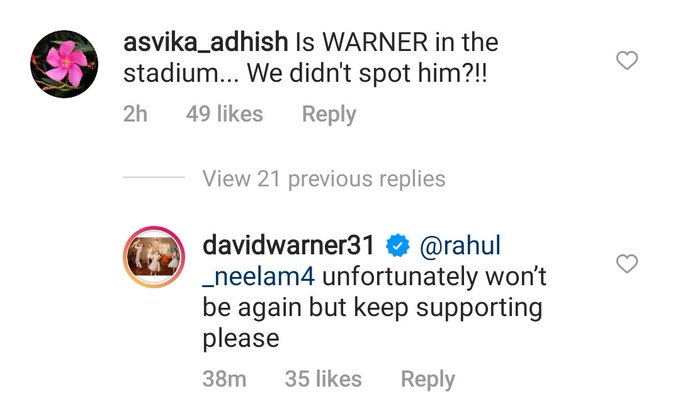 David Warner's reply to a fan, indicating that he won't play again for SRH this season (Photo credit: Instagram)

However, fans were not happy with this development and criticised Sunrisers Hyderabad management for their poor treatment of a player who won them their only IPL trophy, in 2016. Check out some reactions below:

'He will come back for sure'

He will be back with more power for sure @davidwarner31

'Grounded for what?', this user asked

Warner is being grounded for what ? He deserves a team that respects him .A true champion ..RESPECT #DavidWarner

Without playing qualifiers I can tell @SunRisers loose everything by losing IPL legend like @davidwarner31.

We will miss you Warner @davidwarner31

Hope next season will be a good

Will it be a big mistake?

1 bad season and no place for a IPL legend 🤦 The greatest IPL Batsman of all time.

The only player to win orange cap-thrice

The man gave his heart and soul for #SRH

SRH Fanbase is mainly bcs of him

Some fans also wished Warner to be part of their favourite teams next season:

Imagine Virat Kohli, AB de Villiers and David Warner together in one team!

I want #DavidWarner back at delhi capitals..... That guy deserve better❣️