Saina Nehwal had strongly opposed the recent security breach where PM Narendra Modi was made to wait for 15-20 minutes on a highway. Actor Siddharth read the tweet and had put up a derogatory reply about the same. Union Minister Kiren Rijiju and Smriti Irani, singer Chinmayi Sripaada have extended their support to the ace shuttler. 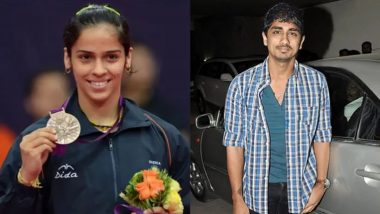 Actor Siddharth's sexist tweet on Saina Nehwal has been making rounds of social media. The tweet has stirred controversy and netizens had slammed the actor for his derogatory tweet directed at the ace shuttler. Now, the likes of Union Minister Kiren Rijiju and Smriti Irani, singer Chinmayi Sripaada have extended their support to the ace shuttler and slammed the actor's derogatory remark. Rijiju and Sripaada took to social media to criticise the actor on social media. Union Minister Smriti Irani explained that every woman deserves to be respected. Parupalli Kashyap & Saina Nehwal’s Father React to Actor Siddharth’s ‘Sexist’ Tweet, Choice of Words Causes an Upset!

Saina Nehwal had strongly opposed the recent security breach where PM Narendra Modi was made to wait for 15-20 minutes on a highway. Actor Siddharth obviously read the tweet and had put up a derogatory reply about the same. His tweet had not impressed Saina's husband Parupalli Kashyap and her father Harvir Singh Nehwal who explained that the actor could have used better words for expressing his opinion. Meanwhile, Kiren Rijijiu and Chinmayi Sripaada also came out in support of Saina.

India is proud of @NSaina for her outstanding contributions in making India a sporting powerhouse. She is a steadfast patriot besides being an Olympic medalist 🇮🇳

Making a cheap comment on such an icon personality depics a person's ignoble mentality. https://t.co/L4yV3xdRuh

This is really crass, Siddharth. You just contributed to what a lot of us women are fighting against.

Smriti Irani also slammed the actor for his choice of words and also the fact the ace shuttler was demeaned for having a political opinion. " As I came to this conversation, I had a world champion, Ms Nehwal, who was demeaned for her political position, no less by a so-called popular actor, a man who would have known better. We need to look at this issue holistically. Are only the men who are caught the ones we need to be concerned about? Or, those who deny a woman the right to speak?… Ms. Nehwal had a point of view. But she was demeaned and objectified. Should such men be brought to justice as well?” Smriti Irani was quoted as saying at the event organised by The Indian Express. Saina Nehwal's father demanded a public apology from the actor for the comment.

(The above story first appeared on LatestLY on Jan 11, 2022 02:53 PM IST. For more news and updates on politics, world, sports, entertainment and lifestyle, log on to our website latestly.com).