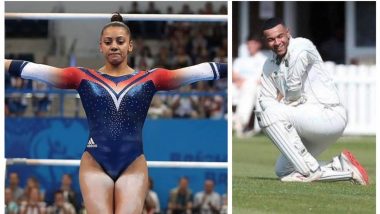 Becky Downie had skipped the final trials for the Tokyo Olympics 2021 last week after her brother Josh's sudden demise. The British Gymnast's brother had died of a heart attack in the nets session. Post this, British Gymnastics gave her a special chance to qualify for the Tokyo Olympics. "We felt it important in such an unprecedented situation to take time to look at how we might be able to grant an extension to the selection window to allow for a further opportunity to complete the trial," said British Gymnastics in a statement. Serena Williams & Rafael Nadal Unsure of Their Participation in Tokyo Olympics 2021 Owing to COVID-19 Pandemic.

The British body further said that this was the right thing to do in such circumstances. Josh had collapsed in the nets in Birkenhead, near Liverpool on May 6, 2021. He was rushed to the hospital and was pronounced dead in the evening. Tributes started pouring in for the young cricketer after he was declared dead. Under such circumstances, even Becky did not give up and started preparing for the trials as they were extended. Becky took to social media and also posted a video of herself preparing for the trials.

Becky also posted an emotional caption along with the video. Check it out below:

The hardest 3 days of my life but I didn’t come this far to only come this far. I know Josh would want me to take it as far as I could go & I owe it to myself to finish what I started.

Doing it for us both 🤍 pic.twitter.com/TwPHMfksp6

The Tokyo Olympics 2021  will begin on July 21, 2021, and will end on August 8. However, owing to the pandemic, many athletes including Rafael Nadal and Serena Williams are quite unsure of their participation in the mega event.

(The above story first appeared on LatestLY on May 14, 2021 08:27 PM IST. For more news and updates on politics, world, sports, entertainment and lifestyle, log on to our website latestly.com).