16-Year-Old Dies in Kanpur While Playing Cricket, Heart Attack Suspected As Cause of Death

A teenager boy, studying in Class 10, collapsed while playing cricket and declared dead when taken to hospital. Doctors suspect the cause of death being a probable heart attack although it couldn't be confirmed. 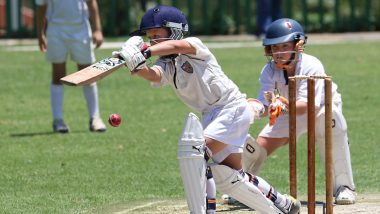 Lately heart attacks have been a very common part of our daily life. As it can be seen a number of celebrities and familiar names around us have had their demise due to heart-attack. This time the tragedy reaches the doorsteps of Kanpur where a teenager of class 10 suffers consequences of an ill-fated heart attack while playing cricket and succumbed to death. #heartattack Trends on Twitter As Netizens Express Worry Over Increasing Cases of Heart Attack, Share Scary Videos of People Dying of Heart Attack on Camera

Like his daily routine, the 16-year-old boy named Anuj Pandey, who used to live in Kanpur city of Uttar Pradesh was taking part in his favourite sport cricket along with his friends. While sprinting for a run available, the teenager felt dizzy and fell down to the ground. He was immediately rushed to the nearby hospital where he was declared dead by the doctors on duty. They also stated the cause of death being heart-attack and considered it as a major possibility. Although it cannot be said surely as Anuj's family members were unconvinced, and they opted to perform Anuj's last rites instead of having a postmortem, which could confirm the heart-attack.

Anuj's father, Mr. Amit Kumar Pandey works in a seed agency. Amit and his wife along with their sons Sumit and Anuj used to live in Triveniganj market of Kanpur. While speaking to the media, Amit said that his son, Anuj, had left home to play cricket with his friends on Wednesday morning. While playing cricket, Anuj allegedly fainted due to dizziness. His friends informed Anuj’s family, who rushed him to a nearby hospital, where doctors declared him brought dead. He added that that he felt dizziness and had chest pain as he tried to run during the game, after which he fell to the ground. The doctor on duty Dr. Ganesh Prasad posted at Community Health Center (CHC) said that the cause of death could be a heart attack.

(The above story first appeared on LatestLY on Dec 08, 2022 11:17 PM IST. For more news and updates on politics, world, sports, entertainment and lifestyle, log on to our website latestly.com).