Australia's white-ball skipper Aaron Finch's recent run of poor form has become a concern for the side as it prepares to defend the ICC T20 World Cup at home later this year, and the country's former all-rounder Shane Watson said on Monday that it "didn't fill me with a lot of confidence". 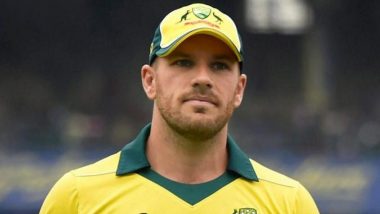 Colombo, June 6 : Australia's white-ball skipper Aaron Finch's recent run of poor form has become a concern for the side as it prepares to defend the ICC T20 World Cup at home later this year, and the country's former all-rounder Shane Watson said on Monday that it "didn't fill me with a lot of confidence". Calls have grown for Finch to be replaced in the side but Australian legend Watson feels it's likely too late to consider looking for a new opener, given there's hardly any time left for the T20 World Cup. Ajinkya Rahane Birthday: Virender Sehwag, Dinesh Karthik and Others Wish Indian Cricketer As He Turns 34.

Finch has been dismissed in single digit nine times in his last 18 T20 outings for Australia in the past one year. He managed to score a half-century only twice during the period. Finch, 35, also looked out of form during the IPL 2022 season for Kolkata Knight Riders, dishing out 86 runs in five outings. "What I saw of him during the IPL in particular for KKR wasn't great and it didn't fill me with a lot of confidence," Watson told the ICC Review on Monday. "But there's a lot of cricket leading up to the ICC Men's T20 World Cup and I know he will be working through it as much as he can and, for Australia's sake, I really hope he can sort that out. But at the moment it is pretty glaring.

"He has got the skills and he is one of the greatest short-form batters that have played for Australia, so he can definitely turn it around, but what I saw didn't fill me with a lot of confidence," opined Watson. Watson said in the ICC Review that he believes Finch is focusing too much on the ball that swings back into the right-hander early in the innings and added that he knows all about that issue, given his own worries with that kind of delivery during his career. "You can see that everything he is setting himself up for is to not be beaten by the ball swinging back in. I was there, especially in Test cricket, and I knew the different things I had to work through from a technical point of view. David Warner, Steve Smith Included in Australia Side for First T20I vs Sri Lanka.

"But then also from a mental point of view as well, you are probably only ever looking for that ball, which means you are missing out on other scoring opportunities. You are setting yourself up for that ball and that ball only and that is exactly what it looked like for KKR (during IPL 2022)." But Watson said that with the T20 World Cup just less than four months away, it was likely too late for Australia to consider looking for a new opener. "The hierarchy of Australian cricket -- (national selector) George Bailey and (coach) Andrew McDonald -- are saying that Aaron Finch is going to be the captain for the T20 World Cup, so I would be surprised if they changed that," Watson said in the Review.

"They are just going to have to put a lot of work in to get Aaron moving in the right direction with his technique. Everyone I talk to about his captaincy says they enjoy everything that Aaron Finch does on the field ... he has obviously been doing a lot right. "I've got my fingers crossed that Aaron is able to sort out what is going on with his technique at the moment and he has got plenty of games to get it right up until the T20 World Cup," added Watson.

(The above story first appeared on LatestLY on Jun 06, 2022 03:26 PM IST. For more news and updates on politics, world, sports, entertainment and lifestyle, log on to our website latestly.com).