Chris Morris Reveals He Might Not Play for South Africa Again, Insists on Not Making Official Announcement

"I am not one for announcing things and officially retiring and all of that. They know where I stand, I know where I stand, but my days are done for CSA, I think they know that” Morris said. He along with Faf du Plessis and Imran Tahir were ignored for the Proteas T20 World Cup 2021 squad. 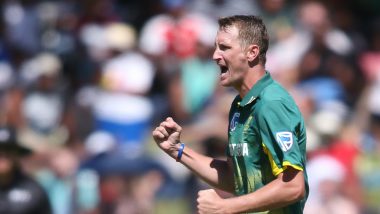 Chris Morris on Wednesday revealed that he might not play for South Africa again in the future. The South African all-rounder says that he would not announce an official retirement as such and insists that his plans of not representing South Africa in the future is known to the country's cricket board and that is probably why he is not being named in their teams. " I had my discussions with whoever I needed to quite a while ago, I haven’t spoken to CSA since then. At the end of the day, how they treated Faf (du Plessis), Immi (Imran Tahir) or me is something they’ve to deal with, there is no way I can comment. I wasn’t a part of the negotiations, I haven’t been spoken to for a year, maybe longer than a year," Morris said, as quoted by Sportskeeda, throwing light on why him along with Faf du Plessis and Imran Tahir were left out of the T20 World Cup 2021 squad. ICC T20 World Cup 2021 Points Table, Super 12

"So can’t really comment on what’s happening, a few stories are coming out, I know which one I can believe. It’s a touchy subject, there are so many different angles to it.  My playing days for South Africa are done. I am not one for announcing things and officially retiring and all of that. They know where I stand, I know where I stand, but my days are done for CSA, I think they know that” the 32-year old added. Morris made his international debut in 2012 and represented the Proteas in a total of 42 ODIs, four Test matches and 23 T20Is. Having played all the formats, he scored a total of 2912 runs and scalped 92 wickets in his Proteas career.

Revealing the reason behind him not making an official announcement of retiring from international cricket, Morris said, "There hasn’t been an official retirement because that’s not how I am, but like I said, my international cricket days are done. I am focussing on domestic cricket and giving back to the team as much as I can. I was fortunate to represent South Africa in all 3 formats, I had an opportunity to represent my country." Quinton de Kock Makes Himself Unavailable After CSA Directs Players to Take the Knee at Start of SA vs WI T20 World Cup 2021 Match: Report

Cricket South Africa (CSA) made the news a month ago for leaving out big names like du Plessis, Tahir and Morris as well from the national squad for the T20 World Cup 2021. Following Chennai Super Kings'(CSK) IPL 2021 title win, the differences between du Plessis and CSA came out to light when the board only congratulated Lungi Ngidi, leaving out the batsman and Tahir, both of whom were also part of the CSK squad.

(The above story first appeared on LatestLY on Oct 27, 2021 02:59 PM IST. For more news and updates on politics, world, sports, entertainment and lifestyle, log on to our website latestly.com).