A day after losing the first Test, New Zealand suffered a setback as pacer Colin de Grandhomme has been ruled out of the second and third Test against England due to an injury. 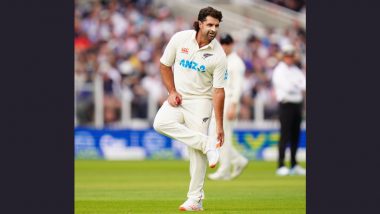 London, June 7 : A day after losing the first Test, New Zealand suffered a setback as pacer Colin de Grandhomme has been ruled out of the second and third Test against England due to an injury. De Grandhomme pulled short during the first Test after suffering a suspected tear to his right plantar fascia, the ligament which connects the heel bone to the toes while bowling in the 2nd session of Day 3 on Sunday. India vs South Africa T20I Series: Rishabh Pant vs Anrich Nortje and Other Mini Battles to Watch Out for.

He underwent an MRI scan on Monday which ruled him out for 10 to 12 weeks and will now also miss New Zealand's upcoming white-ball tour of Ireland, Scotland and the Netherlands. De Grandhomme had done reasonably well in the first Test. Batting at No. 7 in the first innings, he top-scored with 42 not out and then dismissed Joe Root. But things went downhill after that as he was run out off the first ball in the second innings. Joe Root’s Bat Freakishly Stands on Its Own During ENG vs NZ 1st Test, Netizens React (Watch Video).

"It's a real shame for Colin to suffer this injury so early in the series," Gary Stead, New Zealand's coach, told the media on Monday. "He's a massive part of our Test side and we'll certainly miss him. It's great to be able to call on someone like Michael who's been with the squad for the past month and is match ready." New Zealand have added the off-spinning allrounder Michael Bracewell to their squad for the rest of the series. Bracewell was at Lord's as cover for the injured Henry Nicholls, who could return from his calf injury in the second Test at Trent Bridge which starts on Friday, said a report on ESPNcricinfo. New Zealand are due to travel to Nottingham on Tuesday ahead of the second Test and will train on Wednesday and Thursday.

(The above story first appeared on LatestLY on Jun 07, 2022 11:02 AM IST. For more news and updates on politics, world, sports, entertainment and lifestyle, log on to our website latestly.com).