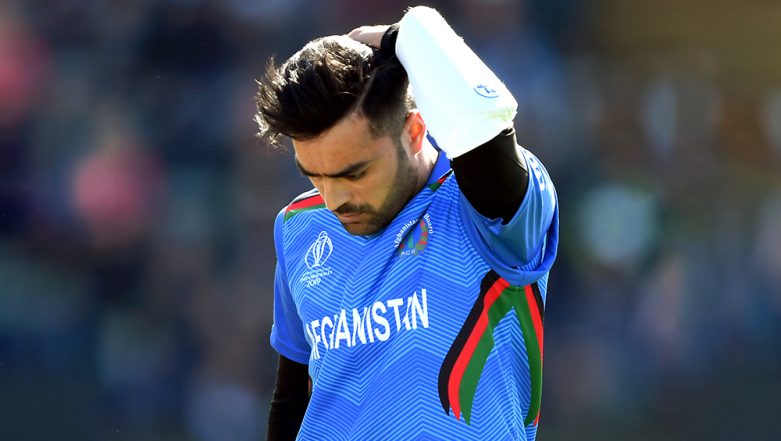 Afghanistan skipper Gulbadin Naib was involved in a hilarious comedy of errors moment during the India v Afghanistan match of CWC19 at the Rose Bowl in Southampton on June 22 (Saturday). Afghanistan, who bowled brilliantly to keep India restricted from scoring a high-total had a great opportunity to dismiss one more India batsman in the first ball of the 45th over. But Gulbadin failed to collect Rashid Khan’s throw at the non-striker’s end even with Kedar Jadhav way out of the crease after MS Dhoni had refused to take a single. India vs Afghanistan Live Cricket Score 28th ODI Match.

The incident occurred in the opening delivery of the 45th over bowled by Rashid Khan. MS Dhoni, who was on strike, had guided the ball towards the leg side and both Dhoni and Jadhav attempted to steal a single. But seeing Rashid rush to collect the ball Dhoni backed off leaving partner Jadhav nowhere in the middle of the pitch. Rashid collected the ball and calmly threw it at the non-striker’s end for Gulbadin to effect the run-out and send Jadhav back. But what unfolded will surely go down as one of the most comical moments of the 2019 Cricket World Cup. Sachin Tendulkar mistaken as Imran Khan by Close aide Naeem UL Haque: Twitterati Brings in PM Modi to Sarfaraz Ahmed in Vintage Pics and Funny Memes.

Check out Another Video of the Incident:

Gulbadin, who was rushing, from mid-wicket, slipped and fell on his face even before the ball could reach him. Rashid had thrown the ball slowly at him so that he could collect it comfortably and without any further problem. But the Afghan skipper not only failed to collect it but also slipped to the ground as the ball reached him. It was a funny moment in an intense game of cricket and both Rashid and Gulbadin later took a laugh at it. KL Rahul Trolled by Netizens After Being Dismissed on 30 Runs During IND vs AFG CWC 2019.

Rashid himself had ample time to hit the stumps directly and could have easily taken a moment and then aimed at it. But nonetheless, the fans a funny moment to savour. Rashid went on to dismiss Dhoni in the very next delivery.

India, who won the toss and elected to bat first, are currently struggling at 218/6 at the end of the 49th over. Only skipper Virat Kohli managed to score a half-century even as the others around him struggled for runs. The Afghanistan bowlers have bowled well in tandem with Mohammad Nabi the pick of them with two wickets from nine overs.