CSK vs GT Preview: Likely Playing XIs, Key Battles, Head to Head and Other Things You Need To Know About TATA IPL 2022 Match 62

The defending champions, who have already been knocked out of IPL 2022, would seek to end their season on a high by doing well in their remaining two games. Gujarat Titans on the other hand, have already qualified for the playoffs and will seek some good preparation ahead of the knockouts. 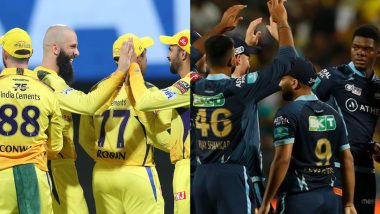 Chennai Super Kings, already eliminated from the competition, would aim to start finishing their season on a high when they face an in-form outfit in Gujarat Titans on Sunday, May 15. The defending champions were ousted from playoff contention by Mumbai Indians in a low-scoring thriller a few days ago. Gujarat Titans, on the other hand, became the first team to qualify for the playoffs when they defeated Lucknow Super Giants in a low-scoring affair of their own. Both teams head into this clash with different mindsets. While Gujarat would look at this game as an opportunity to prepare well before the playoffs, Chennai will seek to take this game to try and finish the season well and possibly try out a few new faces in their lineup. Josh Hazlewood Records Most Expensive Spell Bowled in IPL 2022 During RCB v PBKS Clash

The inaugural season has been an excellent one for Gujarat Titans, who have well-exceeded expectations. But the story has not quite been the same for Chennai, who have had to deal with injuries and also a mid-season captaincy change.

This is only the second time these two teams will face each other in the IPL. Gujarat Titans had emerged victorious the last time these two sides faced off earlier this season.

Devon Conway and Mukesh Choudhary would be crucial players for Chennai Super Kings. For Gujarat Titans, the players to watch out for would be Rashid Khan and Shubman Gill.

Devon Conway's battle with Mohammed Shami in the opening overs would be something really interesting. Fans would also look forward to seeing Shubman Gill's clash against an in-form Mukesh Choudhary.

(The above story first appeared on LatestLY on May 14, 2022 11:16 AM IST. For more news and updates on politics, world, sports, entertainment and lifestyle, log on to our website latestly.com).