Morgan did not have a good time with the bat this IPL, as he could manage just 133 runs at an average of 11.08. For England, he has scored 82 runs in seven T20s this year. 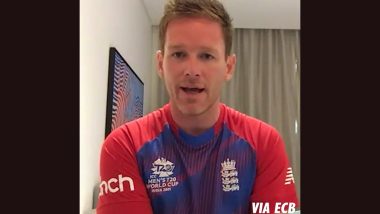 Despite leading Kolkata Knight Riders to the IPL 2021 final and being one of the key figures in their turnaround this season, Eoin Morgan has had an unforgettable time with the willow and ahead of England's T20 World Cup 2021 opener against West Indies, the English skipper hinted at dropping himself if his poor run with the willow continues. The left-hander, who is known to be a devastating batsman in the middle-order and can change the game with the willow, has not been striking the ball well recently and that has put a cloud of uncertainty over his position in the side. Not taking anything away but Morgan is incredible as a captain, making history by leading his side to the 2019 World Cup title. Speaking ahead of the T20 World Cup Super 12 clash against West Indies, the 35-year old said, as quoted by BBC, "I will not stand in the way of the team winning the World Cup.  I've been short on runs but my captaincy has been pretty good."That is always an option."IND vs ENG, T20 World Cup 2021 Warm-Up Game: Virat Kohli-Led Side Trump England in High-Scoring Encounter

💬 "I'm not going to stand in the way of a team winning the World Cup."#T20WorldCup pic.twitter.com/SAooDY6UU0

Morgan did not have a good time with the bat this IPL, as he could manage just 133 runs at an average of 11.08. For England, he has scored 82 runs in seven T20s this year. But the English skipper feels that he can take risks despite his form and has 'come to terms with that'. "I wouldn't be standing here if I hadn't come out of every bad run of form that I've ever had, " he said, adding, "The nature of T20 cricket and where I bat means I always have to take high-risk options. I've come to terms with that."

Not hitting the ball would also not affect his captaincy, Morgan added and shared that he gets two chances to impact a game, as a leader of the side. "I've always managed to compartmentalise both and treat them as two different challenges. Not being a bowler, being a little bit older and contributing less in the field, I've loved the role of captain. You get two bites at the cherry when it comes at impacting the game," he said.

England play West Indies on Saturday, October 23 after facing New Zealand in a warm-up fixture on October 20. Morgan did not take part in England's first warm-up game against India, which they lost convincingly but could potentially have a hit in the middle against the Kiwis.

(The above story first appeared on LatestLY on Oct 19, 2021 10:30 PM IST. For more news and updates on politics, world, sports, entertainment and lifestyle, log on to our website latestly.com).