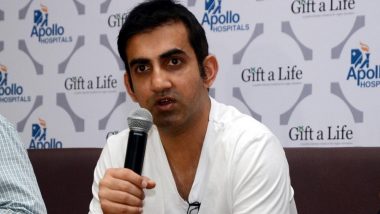 Cricket fans all over India went frenzy ever since the news of India vs Bangladesh pink-ball Test came out. Eden Gardens witnessed a full-house in the encounter and the audience were delighted to see India playing the new version of Test cricket. Now, Gautam Gambhir, who was commentating in the day-night clash, wants BCCI President Sourav Ganguly to organize the Ranji Trophy Final with the pink ball. The 2011-world cup winner was overjoyed by the response the day-night clash got and wants Ganguly to take the format forward in India. Gautam Gambhir Supports Virat Kohli After the Indian Skipper Was Criticised by Sunil Gavaskar.

According to the reports of Times of India, the cricketer-turned-politician heaped praises on Ganguly for organising the Test and executing it well too. "I was at Eden Gardens and the Pink Ball Test was done really well by Sourav Ganguly and his team. There was just enough hype and drama around the game. I was happy to see that fans' interest was not compromised. I'd now request Dada to have a Ranji Trophy final with a pink ball.” said the former Indian cricketer. Gambhir also believes that these are early days for Pink-ball in the Test arena and one should lean on time rather than jumping on the conclusions.

Many cricket experts and pundits have different opinions about the pink-ball game. Many consider it as a future of Test cricket while some have questions about his visibility in the evening time. The day-night Test between India and Bangladesh lasted for mere 3 days and India clinched the encounter by an innings and 46 runs. In the upcoming days, Australia, Pakistan, New Zealand and England are set to play day-night Tests and let’s see what progress cricket’s latest endeavour will make.

(The above story first appeared on LatestLY on Nov 28, 2019 12:58 PM IST. For more news and updates on politics, world, sports, entertainment and lifestyle, log on to our website latestly.com).