Recently, International Cricket council (ICC) took to Twitter again and shared a throwback picture of former Indian captain MS Dhoni and ex-Australian skipper Michael Clarke, asking the fans to caption it. The image appears to be from the Test series during India’s 2011-12 tour of Australia. Well, the fans didn’t take long in responding. 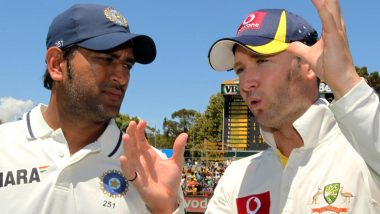 The official Twitter account of International Cricket Council (ICC) has been quiet in recent times and is frequently coming up with intriguing challenges for the cricket fans. Recently, the apex cricket body took to micro-blogging website again and shared a throwback picture of former Indian captain MS Dhoni and ex-Australian skipper Michael Clarke, asking the fans to caption it. The image appears to be from the Test series during India’s 2011-12 tour of Australia. Well, the fans didn’t take long in responding to ICC’s challenge as the comment section of the post was filled with hilarious captions. MS Dhoni Birthday Pic: Sakshi Dhoni Shares Throwback Photo of Hardik and Krunal Pandya.

In the candid pic, the two talismanic cricketers can be seen involved in an in-depth discussion as Clarke is in the middle of the speech while Dhoni is listening to him with utmost concentration. Well, there are numerous stories from the clashes between India and Australia. From the Virat Kohli vs Mitchell Johnson rivalry to the fun banter between Tim Paine and Rishabh Pant, there are several episodes from India vs Australia matches which can’t be forgotten by fans. Keeping that in mind, fans’, on ICC’s demand, stormed the comment section with rib-tickling captions. Have a look. MS Dhoni New Look Surfaces Again As CSK Share Video.

Clarke: You know how to win ICC trophies?

Clarke: You must see the cricket ball thisssss big when you bat 😯

When Clarke explains why it was not out after DRS.

@MClarke23 is asking @msdhoni, “Bro, how to handle this much pressure in death overs. “#Thala #MSDhoni

Meanwhile, the ICC T20 World Cup, which was scheduled to be played in Australia, has been postponed officially due to the COVID-19 pandemic, leaving a window for BCCI to conduct Indian Premier League (IPL) 2020. However, ICC governing council chairman has also announced that the marquee tournament will take place in UAE. As per the latest reports, the tournament is all set to get underway on September 19 while the finals will be played on November 7.

(The above story first appeared on LatestLY on Jul 24, 2020 08:51 AM IST. For more news and updates on politics, world, sports, entertainment and lifestyle, log on to our website latestly.com).