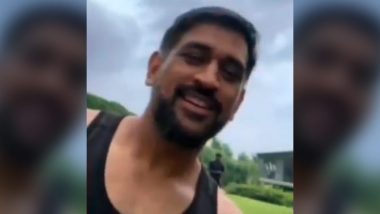 Former Indian captain MS Dhoni hasn’t been active on social media in recent times. Hence, fans have not been able to get the daily updates of the talismanic wicket-keeper batsman. Nevertheless, the 39-year-old has been caught candid in many videos shared by his wife Sakshi. Recently, however, fans got another glimpse of Dhoni in a video posted by the official Twitter account of Chennai Super Kings. The two time World Cup winner can be seen sporting a new look in the clip which became a talking point among the fans. One can see Dhoni smiling and waving hands towards the camera as it seems like he was on a video call. MS Dhoni Not Thinking About Retirement: Former Indian Captain’s Manager.

“The much needed pawsitivity at 7! #Thala @msdhoni #WhistlePodu,” wrote CSK while sharing the viral video on the micro-blogging website. Dhoni fans were nothing but ecstatic when they came across CSK’s post as they filled the comment section in a jiffy. Some praised Dhoni’s new look while others expressed the desire of seeing the veteran cricketer back on the field. Meanwhile, have a look at MS Dhoni’s new look. MS Dhoni Spotted Enjoying Bike Ride at His Ranchi Farmhouse.

Fans Want Him To Come Back!!

Miss you sir please come back in Indian cricket team 😍

Really missing him dearly , his wit , coolness n most importantly the helicopter !!

Since Mahi bhai with long hair, till now.. my love for you the same legend.. my first crush ❤️❤️❤️❤️❤️❤️❤️❤️ love from Assam

Much needed therapy in this stressful period... That smile ❤❤

Badly Waiting for your Grand Comeback...

Meanwhile, MS Dhoni’s future still remains a hot topic of discussion among the cricket fans as the right-handed batsman hasn’t played a professional game after India’s heart-breaking loss against New Zealand in the semi-finals of 2019 World Cup.

(The above story first appeared on LatestLY on Jul 18, 2020 02:45 PM IST. For more news and updates on politics, world, sports, entertainment and lifestyle, log on to our website latestly.com).