After electing to bat first, Zimbabwe managed to post a target of 189 runs for the hosts to chase, losing all ten wickets. Shikhar Dhawan and Shubman Gill put up a 192-run opening partnership to help India chase down the score without losing any wicket. 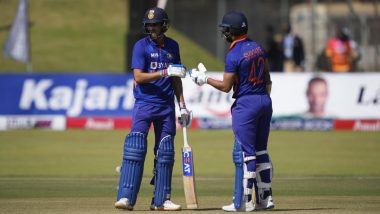 India continued their dominance in the 50-over international format as they defeated Zimbabwe by 10 wickets in the 1st ODI game at Harare Sports Club today, August 18. With this victory, KL Rahul's men made a winning start to the three-match ODI series in an emphatic style. It was yet another sensational all-round display by the Men in Blue in the 50-over cricket just like they did on West Indies tour earlier. IND vs ZIM, 1st ODI 2022: Shikhar Dhawan, Shubman Gill Lead India to 10-Wicket Victory Against Zimbabwe

After electing to bat first, Zimbabwe managed to post a target of 189 runs for the hosts to chase, losing all ten wickets. In reply, India once again comfortably chased down the target in 30.5 overs without losing any wicket, riding on brilliant half-centuries from Shikhar Dhawan and Shubman Gill who put up a 192-run opening partnership.

#India beat Zimbabwe by 10-wicket in the 1st ODI match.

#Shikhar Dhawan scored his 38th ODI fifty in this match, three in his last four ODIs.
#Shubman Gill hit his 3rd fifty in the ODI cricket so far.
#The 192-run partnership between Dhawan and Gill is the second highest opening stand for India in the 10-wicket wins in ODI cricket.
#This is also the second 10-wicket win for India in a calendar year for the first time in history.
#With this win against Zimbabwe, India registered most consecutive wins against an opponent (13).
#KL Rahul won his first match as an Indian captain

India will take a number of positives from this game meanwhile Zimbabwe look to find the right combination as both the teams aim to emerge as winners in the second ODI match which is going to be held on August 20.

(The above story first appeared on LatestLY on Aug 18, 2022 07:37 PM IST. For more news and updates on politics, world, sports, entertainment and lifestyle, log on to our website latestly.com).