India, who lost their opening match to hosts Sri Lanka, are going in unchanged. 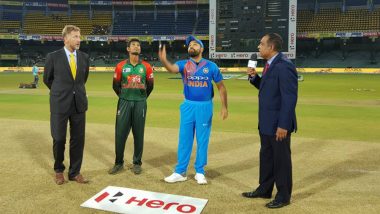 Colombo, March 8: India skipper Rohit Sharma won the toss and elected to bowl against Bangladesh in their Nidahas Twenty20 tri-series match at R Premadasa Stadium. India, who lost their opening match to hosts Sri Lanka, are going in unchanged. Catch all the live action here with India vs Bangladesh Live Cricket Score.

India have met Bangladesh five times in the format and have won all.

The last time the two sides faced each other in World T20, 2016, India secured a last ball heart-stopping victory to save themselves from a knockout.