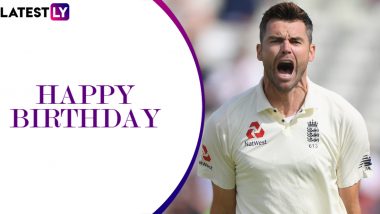 One of the best pacers to have ever stepped onto the cricket field, James Anderson turns 38 on Thursday. Born on July 30, 1982, the right-arm pacer can swing the ball both ways and his record in international cricket is nothing but sensational. Facing Anderson with the brand-new red ball is the last thing a batsman will want as the veteran bowler can move the ball at his will and pierce the defences of the best of the batsmen. With 589 wickets, Anderson is the most successful pacer in the history of Test cricket and looks determined to add some more feathers to his already illustrious hat. Below, we’ll look at some of his best performances in Test cricket. Stuart Broad Birthday Special: 8/15 vs Australia and Other Magnificent Performances.

Making his international debut in December 2002, Anderson burst onto the scenes with some brilliant performances. However, he was also accused of bowling inconsistent with his line and length. The year 2007 saw the resurgence of Anderson as he delivered one sensational performance another and became the spearhead of England pace attack. After England’s disastrous campaign in 2015 World Cup, the veteran pacer was dropped from the side but continued to showcase his blitzes in whites. As the legendary pacer celebrates his 38th birthday, let’s look at some of his best performances in the longest format of the game. Joe Root Says Maximising Careers of Stuart Broad and James Anderson Really Important.

7/43 Vs New Zealand In Nottingham

England posted 364 runs while batting first in the third Test of 2008 Test series and the track looked decent for batting. However, that wasn’t the case when the Kiwis came on to bat. Anderson made brilliant use of the new ball and ripped through the visitors’ batting line-up. He claimed a sensational seven-wicket haul in the second innings as the home side won the game by an innings and nine runs.

Anderson breathed fire with the ball in the third Test of West Indies’ 2017 tour of England. The conditions were overcast and Anderson was at his lethal best. In the third innings of the game, the legendary pacer made the Caribbean dance to his tune as he registered his best figures in Test cricket. His efforts proved to be fruitful as England registered an emphatic nine-wicket victory.

6/47 Vs Australia in Birmingham

The Australian batsmen were trailed by James Anderson’s swinging deliveries in the third Test of 2015 Ashes. The legendary pacer took six wickets in the first innings as the visitors were bundled out for mere 136 runs. England took a heavy first-innings lead and Australia never seemed to make a comeback in the encounter. England won the match by eight wickets and took a 2-1 lead in the series.

5/43 Vs Australia in Adelaide

The second encounter of Ashes 2017-18 saw England playing their first Day-Night Test match. Anderson didn’t look very effective in Australia’s first innings as he picked up only one wicket. However, he did his homework and delivered a stellar spell in the third innings of the match. He ripped apart the potent Aussie batting line-up and took a brilliant five-wicket haul. His efforts, however, didn’t prove to be enough as the home side won the match by 120 runs.

Another James Anderson special was witnessed in the opening Test of India’s 2011 Tour of England. The right-arm pacer produced a stupendous spell in the last day of the game and took wickets at regular intervals. Legends Like Rahul Dravid, Sachin Tendulkar and VVS Laxman looked completely clueless against the pacer as Anderson claimed yet another five-wicket haul. Riding of his performance, England won the game by 196 runs.

Anderson was last seen in action during the recently-concluded Test series against West Indies. Taking five wickets from two games, the maestro wasn’t at his lethal best. However, he will like to redeem himself in the forthcoming three-match Test series against Pakistan, starting from August-. The series could also see Anderson becoming the first pacer to take 600 Test wickets.

(The above story first appeared on LatestLY on Jul 30, 2020 08:10 AM IST. For more news and updates on politics, world, sports, entertainment and lifestyle, log on to our website latestly.com).