Stuart Broad Birthday Special: 8/15 vs Australia and Other Magnificent Performances by Veteran England Pacer As He Turns 34 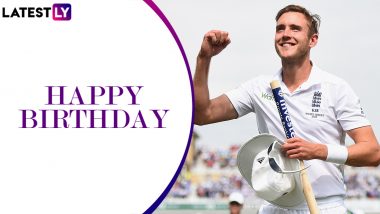 Veteran England pacer Stuart Broad celebrates his 34th birthday on Wednesday (June 24, 2020). The right-arm pacer possesses the ability of swing the ball both ways and that too with a brisk pace. Riding on his ability, the star pacer tormented many potent batting line-ups in his illustrious career. In fact, his success story makes a perfect script for a Blockbuster movie. After getting hit for six consecutive sixes by Yuvraj Singh in 2007 T20 World Cup, many believed that the career of the youngster is over. However, he made a brilliant bounce back and proved his mettle in all the formats of the game. England vs West Indies 2020 Full Schedule: Check Fixtures.

Making his international debut in August 2006, Broad didn't take long in cementing his place in the side. The right-arm pacer found out a great partner in James Anderson and together the duo guided England to many victories. So far, Broad has scalped 485, 178 and 65 wickets in 138 Tests, 121 ODIs and 65 Test matches. Along with his bowling prowess, Broad is also a handy batsman lower down the order who has rescued his side on many occasions. As the talismanic pacer turns a year older, let's look at some of his best performances.

4/24 Vs New Zealand in Auckland

Leading the side during the 1st T20I of England's 2013 tour of New Zealand, Broad put up a brilliant bowling performance and guided the visitors over the line. The track looked ideal to bat on as England piled up 214/7 while batting first. However, the English skipper didn't allow the Kiwi batsmen to score runs at a rapid pace. He scalped four wickets in the game as England clinched the encounter by 40 runs.

5/23 Vs South Africa in Nottingham

Broad breathed fire with the ball during the 2nd ODI of South Africa's 2008 Tour of England and destroyed the Proteas batting order. The young pacer brilliantly exploited the conditions in the first innings and took wickets in a cluster. He took a five-wicket haul which included the wickets of Graeme Smith and Jacques Kallis. As a result, South Africa were bundled out for 83 runs and went on to lose the game by 10 wickets.

8/15 Vs Australia in Nottingham

Another Stuart Broad special came at Nottingham came during the 4th Test of Ashes 2015. With James Anderson not being available for the game, responsibilities on Broad's shoulders were increased. However, he brilliantly rose to the occasion. The talismanic pacer put up a brilliant display of swing bowling as Australia got packed for just 60 runs and that too before lunch on Day 1. Broad scalped eight wickets in the innings as England won the game by an innings and 78 runs.

6/46 Vs India in Nottingham

Broad was at the prime of his all-round capabilities during the 2nd Test of India's 2011 tour of England. Batting first, England were reeling at 7/117 when Broad came into bat and rescued his side. He attacked the Indian bowlers from the outset and scored a brilliant half-century. Broad continued his good form while bowling in the second innings as he took a six-wicket including a hat-trick. As a result, the home team won the game by 319 runs.

The talisman will be next seen in action during the West Indies vs England Test series which will get underway on July 8. The tour will hold a lot of significance as it will mark the return on international cricket after the COVID-19 break. Broad will have a crucial role to play in order to defeat the Caribbean stars and he must be leaving no stones unturned in the practice sessions.

(The above story first appeared on LatestLY on Jun 24, 2020 08:00 AM IST. For more news and updates on politics, world, sports, entertainment and lifestyle, log on to our website latestly.com).