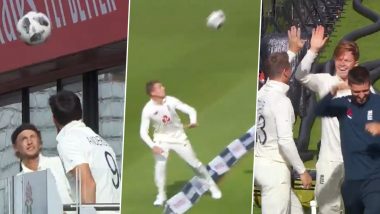 A great contest between the bat and the ball was seen on the Day 1 of England vs Pakistan 1st Test. In a rain-affected day at the Old Trafford in Manchester, the visiting team scored 139 runs for the loss of two wickets. Apart from cricket, however, some England players also showcased their football skills as they executed an incredible headed goal. As the final session of the day halted due to rain, Joe Root and Co picked up a football and impressed not just cricket but football fans too. Live Cricket Streaming of Pakistan vs England 1st Test 2020 Day 2.

The series was started by veteran pacer James Anderson who headed the ball to skipper Root. Then, Chris Woakes, who was standing in the balcony with Root and Anderson, passed the ball downstairs where Jos Buttler and Ollie Pope did some juggling before Mark Wood did the rest by heading the ball to a bin. The English players were delighted and their ecstasy could be seen in their celebrations. Well, Test matches in England often get interrupted by rain. Hence, some other activities were necessary to help them in waiting. Meanwhile, let’s look at the video. Pakistan vs England 1st Test 2020 Day 1 Report: Babar Azam Swings Momentum in Visitors’ Favour.

They did this first attempt... ⚽️😉

Coming to the Test match, Azhar Ali won the toss and elected to bat first. The visitors lost their first wicket in the Abid Ali who fell prey to Jofra Archer for 16 before skipper Azhar Ali was dismissed by Chris Woakes for a duck. Just when Pakistan were looking on the back foot, Babar Azam (69) rose to the occasion and played some brilliant shots. He was well supported by opener Shaan Masood (46) who valiantly faced the England pacers.

Day 2 of the encounter will be very crucial in the contest of the game as Pakistan will eye to register a mammoth first-innings total. On the other hand, the home team will look for quick wickets.

(The above story first appeared on LatestLY on Aug 06, 2020 12:43 PM IST. For more news and updates on politics, world, sports, entertainment and lifestyle, log on to our website latestly.com).