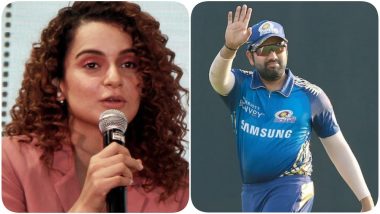 Last night Rohit Sharma and other cricketers urged the Indians to the stay united amid the on-going farmer protests in India. Rohit Sharma, Virat Kohli and Ajinkya Rahane had posted tweets on social media asking the Indians to stay united. Now, Kangana Ranaut took to social media slammed Rohit Sharma and other cricketers. In the tweet, Kangana had questioned the stance of the cricketers. The tweet was deleted by Twitter as it violated the norms of the platform. Even today, Kangana’s tweet was deleted similar nature, saying it violated Twitter rules. Virat Kohli, Rohit Sharma and Ajinkya Rahane React on Farmers Protests, Urge Country To ‘Stay United’ (See Posts).

Rohit Sharma took to social media, “India has always been stronger when we all stand together and finding a solution is the need of the hour. Our farmers play an important role in our nation’s well being and I am sure everyone will play their roles to find a solution TOGETHER. #IndiaTogether,” he had also used an Indian flag in the tweet. Now, let’s have a look at the tweet by Kangana which was deleted by Twitter.

Prior to this, Kangana Ranaut had a spat with Diljit Dosanjh about their on-going farmer protests at the Singhu Border. The Twitter war between the two grabbed headlines and was trending on social media. Popstar Rihanna had tweeted about the on-going farmer's protests in India, post which the likes of Sachin Tendulkar, Shikhar Dhawan, Pragyan Ojha had asked the pop star to stay away from the internal matters of the country.

(The above story first appeared on LatestLY on Feb 04, 2021 11:27 AM IST. For more news and updates on politics, world, sports, entertainment and lifestyle, log on to our website latestly.com).