Arguably the finest batswomen ever, Mithali Raj celebrates her 38th birthday on Thursday (December 3). Born in 1982, Raj has been the face of Indian women's cricket over the years, and her records speak volumes of her prowess. Be it playing an anchor knock or scoring quick runs for her side; the Indian skipper rose to every challenge which came her way. 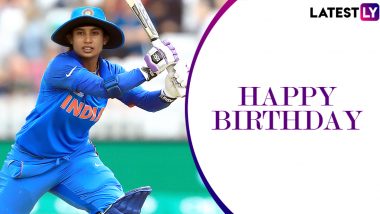 Arguably the finest batswomen ever, Mithali Raj turns 38 on Thursday (December 3) and birthday wishes are pouring in for her from all around the world. Born in 1982, Raj has been the face of Indian women's cricket over the years, and her records speak volumes of her prowess. Be it playing an anchor knock or scoring quick runs for her side; the Indian skipper rose to every challenge which came her way. With 6888 runs, the batting maestro is the highest run-scorer in Women's ODI and is still doing strong. Below, we'll revisit some of her best knocks in international cricket. Mithali Raj Sets Her Eyes on ICC Women’s Cricket World Cup 2021, Says ‘Will Give It a Best Shot.’

Making her debut in June 1999, the Jodhpur-born cricketer burst onto the scenes with her fantastic stroke play. Her ability to score runs under crunch situations impressed one and all as she didn't take long in stamping her authority. Although she has seen many ups and downs in her two-decade-long career, shortage of runs has never been her problem. Raj was appointed the captain of the national team in 2005, and she delivered in that department as well – becoming only the second Women cricketer to bag 100 victories as skipper. As Raj turns a year older, let's revisit the times when she made her bat talk. This Day That Year: Mithali Raj Becomes the Highest Run Scorer in Women’s ODIs.

Raj was at the peak of her prowess during the second Test of India's Women 2002 Tour of England. In reply of England's 329 runs in the first innings, the right-handed batswoman came into bat when India were reeling at 45/2. She, however, valiantly faced the English pacers and went on to score a fabulous double century. Her heroics powered India to 467 runs with the game resulting in a draw.

Stakes were highest when India faced Pakistan in the seventh-place play-off match of ICC Women's World Cup 2013. Chasing a mediocre target of 193, India's batting line-up collapsed terribly with the likes of Harmanpreet Kaur and Poonam Raut back in the hut cheaply. The mantle of run-scoring was again on Raj, and she didn't disappoint. The skipper scored a splendid century, helping her team register a win by six wickets.

Raj enjoyed a sensational run in the ICC Women's World Cup 2017. Her best outing, however, came against New Zealand in the group stage of the tournament. On a challenging Derby track, the batswoman showcased excellent resilience and went on to complete a staggering century. In total, she scored 109 runs as India advanced to a score of 265 while batting first. Kiwi's task proved to be too much for the Kiwis as they lost the game by 186 runs.

This knock by the Indian skipper will undoubtedly go down as one of the greatest efforts in a losing cause. In the third ODI of India Women's 2018 Tour of Sri Lanka, the visitors' top-order was rattled by the Sri Lankan bowlers. However, the veteran batswoman came to India's rescue and guided her side to safety. Despite not getting much support from another end, Raj got going, and she smashed a brilliant ton. She powered her side to 253 in the first innings but her brilliance went in vain with India losing the match by three wickets.

The Indian cricket legend bid farewell to the shortest format of the game in 2018 to focus on the ICC Women's Cricket World Cup 2021. The gala tournament is all but likely to be Raj's last event, and she'll like to end her career on a winning note. She was last seen in the Women's T20 Challenge 2020 where she led Velocity.

(The above story first appeared on LatestLY on Dec 03, 2020 07:42 AM IST. For more news and updates on politics, world, sports, entertainment and lifestyle, log on to our website latestly.com).