PBKS vs LSG Stat Highlights, IPL 2022: Bowlers Win It for Lucknow Super Giants on a Tricky Surface in Pune

KL Rahul's men continued their impressive run in IPL 2022 with a clinical bowling show helping them beat Punjab Kings by 20 runs. On what appeared to be a tricky surface, Lucknow bowlers did well to restrict Punjab Kings' much-talked-about batting order to pull off a victory. 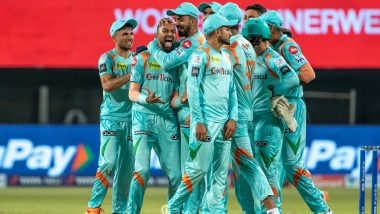 Lucknow Super Giants continued to make a strong case for qualifying for the playoffs with an impressive 20-run victory over Punjab Kings on Friday, April 29. KL Rahul's men surged up to the third spot on the points table and now, they have six wins in nine games and are one of the strong contenders to make the last four in this 10-team competition. Lucknow's batting faltered today and some late strikes from the bats of Mohsin Khan (13*) and Dusmantha Chameera (17*) ensured that they got to 153/6, a total of some substance. IPL 2022 Points Table Updated With NRR: Lucknow Super Giants Climb to Third Spot With Win Over Punjab Kings

On a day their batters failed, their bowlers turned up and took the lead. Punjab Kings, despite getting off to a decent start, lost wickets at regular intervals, much like what Lucknow did when they were batting. Mohsin Khan, after contributing with the bat, did his part with the ball as he scalped three wickets for 24 runs, one of his victims being the dangerous Liam Livingstone, who was looking good for his 18 runs. The area where Khan impressed the most was his change of pace as he varied it from bowling the fastest delivery of the game to slowing it down, which had Livingstone edge behind for a simple catch while trying to play the scoop shot. Dushmantha Chameera had another good day with figures of 2/17 in his four overs. In the spin bowling department, it was Krunal Pandya, who was mighty impressive with figures of 2/11 in his four overs.

For Punjab Kings, their top-scorer was Jonny Bairstow (32), who had kept alive the hopes for his side but it all disappeared when Chameera got rid of him in the 16th over. It was an average batting show that led Punjab down in a game they should have won.  Rishi Dhawan (21*) did strike some lusty blows but it was not enough. Earlier, Punjab's bowlers did well to ensure Lucknow Super Giants did not get many runs on the board. Kagiso Rabada was on fire, as he scalped four wickets, one of them including KL Rahul, to dent Lucknow's batting, which collapsed from 98/2 to 126/7.

#Kagiso Rabada had his fifth five-wicket haul in the IPL, the third-highest in the competition

Lucknow Super Giants will now turn their focus to Delhi Capitals, who they face on May 1. Punjab Kings, on the other hand, next take on Gujarat Titans on May 3.

(The above story first appeared on LatestLY on Apr 30, 2022 12:11 AM IST. For more news and updates on politics, world, sports, entertainment and lifestyle, log on to our website latestly.com).