Rohit Sharma Backs Rishabh Pant After He Missed Liton Das’ Stumping, Says He Is Young and Allow Him to Play Cricket

"He is a fearless cricketer and we (team management) want him to have that freedom. And if you guys take your eyes off him for sometime, it will allow him to perform even better." The captain went on to point that the wicket-keeper is a youngster and should be allowed to express himself and play the game. 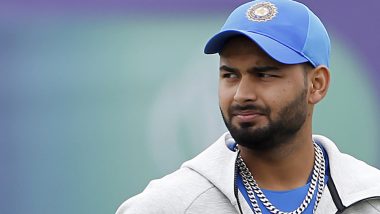 Nagpur, November 9: Rishabh Pant has come under a lot of criticism in recent times, especially after he missed an opportunity to stump Liton Das in the second T20I against Bangladesh in Rajkot. But stand-in skipper Rohit Sharma wants fans and the media to let him breathe and not focus on every move the youngster makes. Speaking to the media on the eve of the third T20I, Rohit said: "You know there is a lot of talk happening about Pant every day, every minute. I just feel that he needs to be allowed to do what he wants to do on the field. I would request everyone to keep their eyes away from Pant for a while."

"He is a fearless cricketer and we (team management) want him to have that freedom. And if you guys take your eyes off him for sometime, it will allow him to perform even better." The captain went on to point that the wicket-keeper is a youngster and should be allowed to express himself and play the game. Rishabh Pant’s Faux Pas Behind Stumps in IND vs BAN 2nd T20I: Indian Keeper Catches Ball Before It Crosses Stumps; Twitter Toasts Him As Stumping Mistake Video Goes Viral.

"He is a young guy, 22, trying to make his mark in international cricket. Every move he makes on the field, people start talking about him. It is not fair. I think we should allow him to play his cricket which actually he also wants to do," he said. While people have gone overboard with Pant's poor dismissals and wicket-keeping gaffs, Rohit wants people to also focus on the good work that he does.

"Focus on him a lot more when he is doing good things also, not just bad things. He has been learning, there have been times he has kept well also. He is trying to do what the team management wants him to do," he pointed. Apart from standing behind Pant, Rohit also praised Shreyas Iyer and said that the youngsters are very talented and have great ability. He went on to add that he just wants the youngsters to feel confident out in the middle.

"Both of them are very talented, have great ability in whatever they do. Definitely the future of Indian cricket and they have proved that at all levels. Rishabh has been around for a year to two. Shreyas has been in and out but now he looks settled in ODIs, trying to make a mark in T20s.

"All I would tell them is just understand your game which is very important in whatever format you play. Feeling confident about your game is very important. They are working hard towards their game so I don't see any reason why they can't get the results. They have everything to be successful at the international level. In a year or two you will see them batting differently," he said.

(The above story first appeared on LatestLY on Nov 09, 2019 05:06 PM IST. For more news and updates on politics, world, sports, entertainment and lifestyle, log on to our website latestly.com).