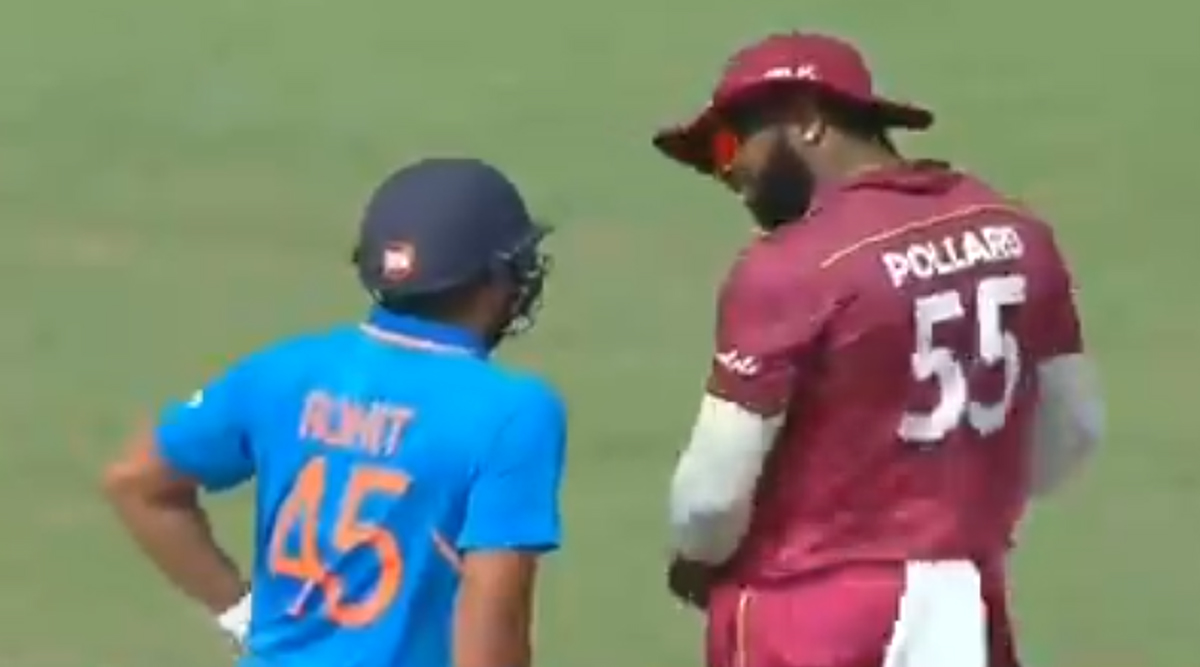 It might be called as ‘not so gentlemen’ gesture in cricket, but Rohit Sharma did something during India vs West Indies 1st ODI which made cricket fans go ROFL. During India’s batting in the 1st innings of the match, Rohit Sharma used a cuss word for Kieron Pollard. The incident happened right before KL Rahul’s dismissal during Sheldon Cottrell’s over. The video of the funny moment started doing the rounds on social media. Twitterati were amused to witness Hitman Rohit Sharma hitting Kieron Pollard with his words this time. India Vs West Indies, Live Cricket Score 1st ODI Match.

During Sheldon Cottrell's 7th over, Rohit took a single on the first ball. India reached 20-0 after Rohit’s shot. Sharma asked something to Pollard to which the latter replied with a funny dance move. Listening to this, Sharma said something which you can listen in the video. Have a look at the video below. (The video contains abusive language, viewer’s discretion advised).

The video became too popular on social media and Twitterati left no stones to make it viral with their comments and shares. While some netizens lauded Rohit Sharma for his sense of humour, others just kept on sharing laughing emojis on the video. Have a look at netizens' funny tweets and funny memes over the video. Ravindra Jadeja Run-Out Controversy: Virat Kohli and Kieron Pollard Left Fuming After Poor Umpiring in India vs West Indies 1st ODI 2019.

love you Rohit, has a great sense of humour pic.twitter.com/oXU9P1ZRcl

While Indian skipper Virat Kohli is well known for using cuss words during matches, Rohit Sharma is often considered as a calm and composed player. But this is not the first time that Mumbai Indians' skipper has been caught using cuss words on camera. Recently during one of India’s Test matches, Rohit had used a cuss word for Cheteshwar Pujara after the latter refused to take a run. IND vs WI 1st ODI 2019: Shreyas Iyer, Rishabh Pant Shine As India Post 287/8.

Meanwhile, India scored 287-8 while batting first in IND vs WI 1st ODI 2019. The match at MA Chidambaram Stadium in Chennai observed Shreyas Iyer (70) and Rishabh Pant (71) hitting fifties. Rohit Sharma hit 36 runs, however, he was caught out by Alzarri Joseph’s clever delivery. Kedar Jadhav contributed 40 runs in the end which enabled India to reach a massive score at Chennai’s Chepauk Stadium. At the end of 34 overs, West Indies were reeling at 181-1 with Shai Hope and Shimron Hetmyer on the crease. While wicketkeeper Shai Hope (60*) has hit a half-century in the match, Shimron Hetmyer (102) has already smashed a century.