Shikhar Dhawan Has His Say on Playing Behind Closed Doors, Says ‘We Are Going to Miss Playing in Front of Huge Crowd’ 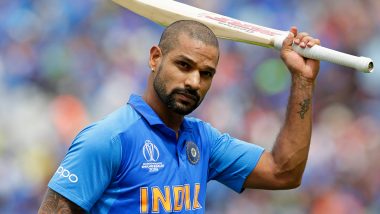 After more than two months of no international cricket, boards all around the world are planning to resume the action in gentleman's game following the easement in COVID-19 lockdown restrictions. However, one thing is sure that if the games will take place, they will be played behind doors. Many cricketers opened up about how it would be playing without spectators and India's swashbuckling opener Shikhar Dhawan is the latest one to join the list. According the left-handed batsman, the absence of fans in the stadium will surely leave a void as the players will certainly miss playing in front of 'huge crowd.' At the same time, however, the veteran cricketer said that it is also important for the game to resume. Shikhar Dhawan Pens Down Heartwarming Post for Wife Ayesha and Shares It With a Picture of Couple on Social Media.

"Obviously, we are going to miss playing in front of a huge crowd if tournaments take place behind closed doors, the fans bring their own charm and aura, but at the same time it would be an opportunity as we have been sitting at our homes for two months now," Dhawan told former Sri Lankan captain Angelo Mathews during a live chat session on Instagram.

The dasher further said that all the players must be eager to get back onto the field. Hence, getting a chance to play will be great thing. "Once we go back, we all will be very hungry to play and perform for our teams, it is going to be good fun, at the end of the day, when we are playing, it is always a good feeling," he added.

In normal circumstances, Dhawan would have been playing for Delhi Capitals in the Indian Premier League (IPL). However, just like many other major cricket tournaments, the T20 extravaganza has also been postponed indefinitely owing to the coronavirus scare. However, Dhawan is optimistic about the fate of IPL 2020.

"Hopefully, the IPL will happen, I always think in a positive manner, it will be really good if the tournament goes ahead, the security of everyone will need to be taken care of, if it happens, it will be really good as it brings a lot of positivity. It's very important that some sports return to improve the environment and mood, it will have a huge impact if the IPL returns," added the 34-year-old cricketer.

Meanwhile, good news for the cricket fans is that the Board of Control for Cricket in India (BCCI) is planning to resume the practice session of the Indian cricket team at the National Cricket Academy (NCA) in Bengaluru. However, the likes of Virat Kohli, Rohit Sharma and Ajinkya Rahane are like to remain stranded in Mumbai as their city comes under the most affected region in India.

(The above story first appeared on LatestLY on May 24, 2020 09:11 PM IST. For more news and updates on politics, world, sports, entertainment and lifestyle, log on to our website latestly.com).