Sunrisers Hyderabad, who are not likely to make it to the playoffs, would plan for adding further misery to Punjab Kings, who let go off an almost guaranteed win in their last fixture against Rajasthan Royals. KL Rahul would find it difficult to motivate his troops ahead of this match. 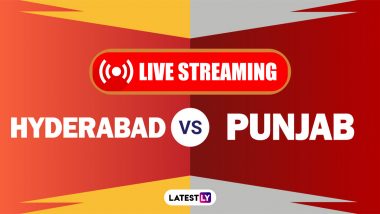 Sunrisers Hyderabad would take on Punjab Kings at the Sharjah Cricket Stadium in Sharjah on Saturday, September 25 at 7:30 PM IST (Indian Standard Time). Both sides have had struggling campaigns and this match could be that game where fortunes change for one side while the other remains grounded. Punjab Kings had a golden opportunity to redeem their campaign in their  last match against Rajasthan Royals. Chasing just four to win off the last over is a pretty doable task in T20 cricket and they somehow messed it up, losing the match by an agonising margin of just two runs. Not taking anything from youngster Kartik Tyagi, who sensationally defended those runs and won a memorable match for his side but it was Punjab Kings, who took the chase that late  and hence, succumbed to the pressure. KL Rahul's men would aim to do everything in their  path to overcome the shock from that defeat and regroup for this encounter, which, based on recent form, looks to be slightly tilted in their favour. SRH vs PBKS Preview: Likely Playing XIs, Key Battles, Head to Head and Other Things You Need To Know About VIVO IPL 2021 Match 37

Hyderabad on the other hand, have not been anything like the side which used to challenge for top four spots in the previous seasons. Starting the season at the bottom of the table, things just became worse for them when they were hit  hard by an in-form Delhi Capitals outfit, who completely outplayed them in all facets of the game. Also, they have been hit with a COVID-19 infection to one of their important players, T Natarajan. Adding to it, has been the poor form of David Warner, who failed to shine with the bat in their last outing. Out of contention for the playoffs, Kane Williamson's men would hope to draw something out of their disappointing campaign and potentially spoil Punjab's chances. IPL 2021 Points Table Updated

Those unable to watch the SRH vs PBKS match live on television can follow the game online. Disney+Hotstar will be live streaming the Sunrisers Hyderabad vs Punjab Kings match online for its fans in India. Fans, however, need to subscribe to Hotstar by paying a nominal subscription fee. JIO are also providing Hotstar subscriptions on select plans.

(The above story first appeared on LatestLY on Sep 25, 2021 11:14 AM IST. For more news and updates on politics, world, sports, entertainment and lifestyle, log on to our website latestly.com).