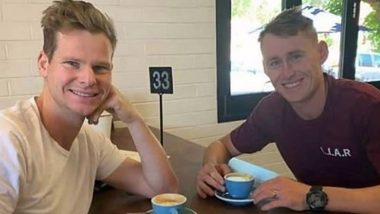 Australia’s rising batting sensation Marnus Labuschagne celebrates his 26th birthday on Monday (June 22, 2020) and wishes are pouring in for him from all around the world. On the occasion, Steve Smith also took to his official Instagram account and extended greetings for his partner-in-crime. The top-ranked Test batsman called Labuschagne the strangest person he ever came across and second-best latte artist after him. Both Smith and Labuschagne are the cornerstones of Australia’s batting line-up and seem to share a great bond too. On many occasions, in fact, the two right-handed batsmen have tormented the opposition bowlers together and guided the Aussies to victory. Steve Smith Reveals One Thing Which He ‘Admires’ the Most About Virat Kohli.

“Happy birthday to the strangest bloke and 2nd best latte artist in this photo @marnus3,” wrote Smith while sharing a snap with Labuschagne on the picture-sharing website. Well, the caption certainly depicts the camaraderie shared by the two cricket stars. Meanwhile, have a look at the post shared by Smith.

Interestingly, the world saw Labuschagne’s potential when he replaced Smith during the Lord’s Test in 2019. Smith was ruled out of the second innings of the game after getting hit by a vicious bouncer by Jofra Archer. Labuschagne, being the concussion substitute of Smith, played the second innings and scored an impressive fifty. There was no looking back for him after that as he went on a run-scoring spree and broke down a plethora of records.

With 1104 runs, in fact, he was the leading run-scorer in Test matches held in 2019. Well, cricket schedule is expected to be hectic post COVID-19 and the two will have the mantle to guide the Aussies to numerous victories.

(The above story first appeared on LatestLY on Jun 22, 2020 02:08 PM IST. For more news and updates on politics, world, sports, entertainment and lifestyle, log on to our website latestly.com).