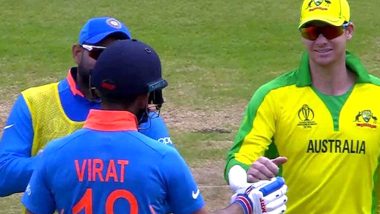 Steve Smith and Virat Kohli are two of the best batsmen in modern-day cricket and their records in international cricket speak volumes about their capabilities. However, the batting greats also share a history. From getting involved in a verbal battle on the field to Kohli saving Smith from the boos of the crowd, both the batsmen came a long way. Recently, Smith heaped praises on his Indian counterpart and listed out qualities which he admires about him. The Aussie star said that Kohli has a huge appetite of runs which drives him to get better with passing day. Steve Smith Birthday Special: Few Best Performances by One of the Greatest Batsmen of Modern Era.

“Look, I admire Virat a lot. He is an amazing player. You look at his record now, simply incredible. He’s done so much for India in cricket. They way they play their game now, the sheer passion he has got for Indian cricket,” Steve Smith said on Sony Ten Pit Stop. Steve Smith Birthday Special: Lesser-Known Facts About Australian Cricketing Genius.

“His willingness to improve and get better. You can see his body has sort of transformed over time. He is so fit and strong now and powerful. He is pretty amazing for cricket,” he added.

Smith also went on to reveal the one factor which he admires most about the Indian captain. “The one thing I admire about him is the way he chases in white-ball cricket. You look at his average in winning chases in ODIs and it is simply phenomenal. So good under pressure, calm and just gets the job done more often than not. You have got to admire someone like that,” he added.

The former Aussie captain, who started his career as a leg-spinner, said that he doesn’t like to bowl much but would love to dismiss Kohli. “I don’t like bowling that much. Every now and then, it’s fine. If I am bowling in a game, that means we’re in trouble. So hopefully, it doesn’t happen too often. You always like to get the best out, why not Virat?” Smith said.

Well, India’s 2020-21 Tour of Australia has received a green signal from the boards of both the countries. The two cricketing powerhouses will be locking horns in October later this year as the ICC T20 World Cup is set to get postponed. So, Smith and Kohli will face each other again and will look to guide their side over the line.

(The above story first appeared on LatestLY on Jun 02, 2020 10:17 AM IST. For more news and updates on politics, world, sports, entertainment and lifestyle, log on to our website latestly.com).