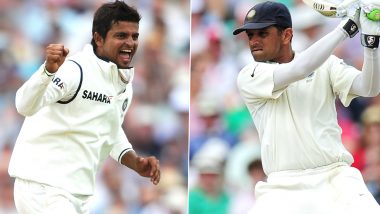 Suresh Raina was left in awe after watching a montage of Rahul Dravid’s brilliant catches during his time with the Indian national team. Dravid, who still holds the record for most catches by a fielder in Test matches, has taken some great catches in his career and had one of the safest pair of hands in the Indian side. The compilation video of some of Dravid’s most wonderful takes was shared on Twitter by veteran off-spinner Harbhajan Singh, who has been the beneficiary of Dravid’s safe pair of hands. Rahul Dravid Asked Sachin Tendulkar and Sourav Ganguly to Not Play ICC T20 World Cup 2007: Lalchand Rajput.

Harbhajan shared the video on Twitter and captioned it “Outstanding catcher Rahul Dravid.” In the video, Dravid can be seen taking some spectacular one-handed catches while standing in the slip cordon or on square point or at short point among other positions. Suresh Raina Shares Adorable Picture With His ‘Curious Cat’ Son Rio, Says ‘All He Wants These Days Is to Explore Everything’ (See Post).

With or without his bat, he is, & will always be, THE WALL on the field! It has been a blessing to have been a part of his cricket journey, enjoying & celebrating every moment on the field! https://t.co/Uq9kRtopbS

Raina, who has also played cricket under Dravid and is aware of his catching exploits said that with or without a bat, the 47-year-old will forever remain ‘The Wall’ of Indian cricket. “With or without his bat, he is, & will always be, THE WALL on the field! It has been a blessing to have been a part of his cricket journey, enjoying & celebrating every moment on the field!” Raina wrote sharing the compilation video of Dravid’s catches.

Many of Harbhajan and Anil Kumble’s wickets across formats have come via Dravid’s catches. Dravid was a common figure at slip when either of Bhajji or Kumble bowled.

Dravid is fourth in the list of most catches taken by an outfield player in cricket’s history. The exclusive list is led by former Sri Lanka captain Mahela Jayawardene (440) who is followed by Ricky Ponting (364), Jacques Kallis (338) and Rahul Dravid (334). Dravid also leads the Indian overall list and is only behind Mohammad Azharuddin, Sachin Tendulkar and Virat Kohli in the Indian ODI catches charts.

(The above story first appeared on LatestLY on Jun 30, 2020 01:33 PM IST. For more news and updates on politics, world, sports, entertainment and lifestyle, log on to our website latestly.com).