On many occasions, the joined forces of the two batting stalwarts have given nightmares to the opposition batsmen. However, it was exactly this day (July 29) in 2006 when the legendary duo scripted history. Sangakkara and Jayawardene tormented the South African bowlers in Colombo and recorded 624 runs for the third wicket, the highest partnership in Test Cricket. 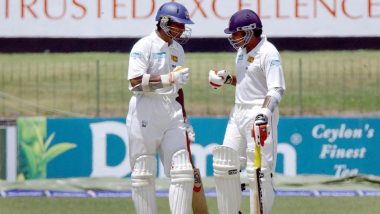 Former Sri Lankan batting stars Kumar Sangakkara and Mahela Jayawardene are regarded as two of the best batsmen to have ever stepped onto the cricket field and their record speaks volumes of their capabilities. On many occasions, the joined forces of the two batting stalwarts have given nightmares to the opposition batsmen. However, it was exactly this day (July 29) in 2006 when the legendary duo scripted history. Sangakkara and Jayawardene tormented the South African bowlers in Colombo and recorded 624 runs for the third wicket, the highest partnership to date not just in Test cricket but in first-class cricket too. Highest Partnerships in Test Cricket: Listing Top Five Stands for Any Wicket.

South African captain Ashwell Prince won the toss and elected to bat first. The decision proved to be a disastrous one as Dilhara Fernando and Muttiah Muralitharan took four wickets apiece and the visitors were bundled out for just 191 runs. In reply, Lankans also got off to a shaky start as Dale Steyn made an impeccable use of the brand-new red-cherry and dismissed openers Upul Tharanga (7) and Sanath Jayasuriya (4). The home side was tottering at 14/2 and the Proteas side looked well in the hunt. Highest Partnerships in ODIs: Listing Top Five Stands for Any Wicket Including 318-Run Partnership Between Sourav Ganguly and Rahul Dravid.

🔸 Mahela Jayawardene 374#OnThisDay in 2006, after having batted together for over 150 overs, the 🇱🇰 batting maestros forged a partnership of 624 runs for the third wicket v 🇿🇦

The epic stand is a record in Test as well as first-class cricket 🤯 pic.twitter.com/t2xQfIBkFb

However, Kumar Sangakkara joined forces with skipper Mahela Jayawardene and since then, it was one-way traffic. Both the batsmen gave full respect to the good deliveries while the bad ones were dispatched to boundaries. Veterans like Andre Nell and Makhaya Ntini looked completely ineffective as Prine was running out of options.

After the failure of regular bowlers, part-timers like Jacques Rudolph and AB de Villiers were also asked to roll their arm over. However, that move didn’t work either. Both Sangakkara and Jayawardene brought up their centuries but didn’t look satisfied. Both crossed the 200-run mark in the third session of Day 2 and fans were waiting how far they will go.

Day 3 of the game saw them surpassing the record of another Sri Lankan duo Roshan Mahanama and Sanath Jayasuriya who held the record of highest partnership in Test cricket. They scored 576 runs against India in 1997. However, Sangakkara and Jayawardene surpassed them and scripted history.

The record stand was finally broken when Sangakkara fell prey to Andrew Hall for 287 while Jayewardene was dismissed by Andre Nel for 374, still the highest individual score by any Sri Lankan in Test cricket. Courtesy the duo’s colossal 624-run stand, the home side declared at 756-5 and went on to win the game by an innings and 153 runs.

(The above story first appeared on LatestLY on Jul 29, 2020 03:23 PM IST. For more news and updates on politics, world, sports, entertainment and lifestyle, log on to our website latestly.com).