Virat Kohli Becomes the Only Player to Feature in Finals of All Major Tournaments After His Appearance in IND vs NZ, WTC 2021 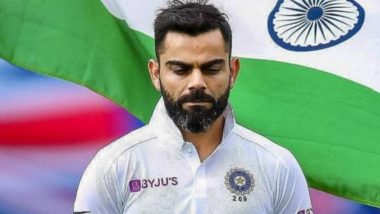 Breaking records seems to be a regular day at the office for the Indian cricket captain Virat Kohli. This time he broke yet another record and that too even without stepping onto the field during IND vs NZ, WTC 2021 finals. The Indian cricket captain became the only player to feature in all the major tournaments of the ICC. His career began in the 2011 World Cup when he was a part of the team which brought the glory back home by defeating Sri Lanka at the Wankhede Stadium. India vs New Zealand ICC WTC Final 2021 Day 2 Live Updates.

The right-hander was also a part of the team that defeated England in the Champions Trophy in 2013. This was once again under the captaincy of MS Dhoni. In 2014, he was once again part of the ICC  ICC World T20 final for India in the year 2014 which India lost against Sri Lanka. That was a low-scoring game in which India suffered from a defeat. This time in 2017, the Indian cricket team captain led India in the Champions Trophy against Pakistan in England. The Indian team lost the finals to Pakistan. With the World Test Championship 2021 being underway currently, Kohli is handing the reins of the Indian team.

Talking about the current game which is underway at the Rose Bowl Cricket Ground, New Zealand has won the toss and elected to bowl first. For now, we have openers Rohit Sharma and Shubman Gill batting for the Indian team. Day 1 of the match was washed out due to rains.

(The above story first appeared on LatestLY on Jun 19, 2021 03:50 PM IST. For more news and updates on politics, world, sports, entertainment and lifestyle, log on to our website latestly.com).