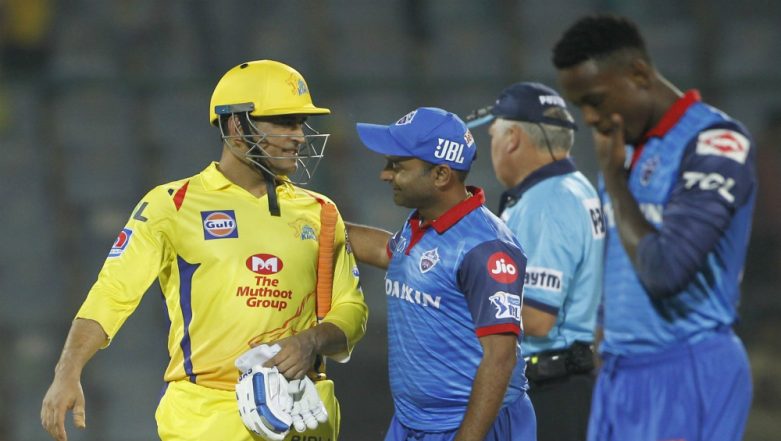 New Delhi, March 27: Mahendra Singh Dhoni might have lost the toss, but Chennai Super Kings used the conditions at the Ferozeshah Kotla beautifully as they beat Delhi Capitals by six wickets on Tuesday.

If Dwayne Bravo (3/33) was the star with the ball, it was a combined effort bythe CSK top order as they chased down the target of 148 with two balls to spare. CSK beat DC by 6 wickets | Delhi Capitals vs Chennai Super Kings Live Cricket Score 5th T20 Match.

The chase didn't start on expected lines for Chennai as they lost Ambati Rayudu (5) in the third over of the game as DC skipper Shreyas Iyer took an easy catch at mid-off off Ishant Sharma's bowling, but that was where the joy ended for Delhi as Shane Watson combined beautifully with Suresh Raina to take the attack to the DC bowlers. DC vs CSK, IPL 2019 Stat Highlights: Shane Watson Guides CSK Home, As Dwayne Bravo Snaps Three Wickets Against Delhi Capitals.

While the CSK bowlers had used the conditions well, the Delhi bowlers left a lot to be desired. The score read 60/1 at the end of the powerplay as the duo of Watson and Raina looked in complete control. It looked like they would take the game home before Amit Mishra dismissed Watson (44) against the run of play.

With the score on 72/2, everyone waited for Dhoni to come to the crease, but the fans had to wait as Kedar Jadhav walked in to join Raina. But the wish of the capacity crowd at Kotla was finally fulfilled in the 11th over when Mishra sent back Raina (30) with the score reading 98/3.

After that Dhoni, (32* off 35 balls) and Jadhav (27 off 34 balls) took Chennai home with some smart display of batsmanship. Even though the required rate did go over six towards the end, there was no pressure as such on the duo and it was more about crossing the line. Although Jadhav was dismissed with two runs left to get, Bravo completed the formalities.

Earlier, DC opener Shikhar Dhawan struggled his way to a 47-ball 51 as the Delhi Capitals managed to score just 29 runs in the last five overs to finish on 147/6 in their 20 overs. This after the Delhi batsmen picked 17 runs from the 14th over of the match from Bravo.

A senior member of the team, one would have expected Dhawan to make it count after spending quality time in the middle, but he failed to accelerate after scoring a laborious fifty as the Chennai bowlers slowed things down by bowling a tight line and length.

Iyer had won the toss and decided to bat first on a Kotla wicket that wore a typical low and slow look. But it was the Chennai bowlers who looked to be at the top of their game.

Even though Prithvi Shaw looked to be positive against CSK pacer Deepak Chahar, the bowler had the last laugh as he dismissed Shaw (24) in the 5th over. DC ended the powerplay at 43/1.

The fall of wicket slowed things down quite a bit as Iyer and Dhawan found the going really tough against the Chennai bowlers who slowed the pace and looked to take advantage of the wicket.

Having struggled their way to 65/1 after 10 overs, DC lost Iyer in the 12th over as he was trapped right in front of the wicket by Imran Tahir for a 20-ball 18.

With the scoreboard looking pretty ordinary, Rishabh Pant looked to take the attack to the Chennai bowlers and was good till Bravo dismissed him in the 16th over, caught brilliantly at deep square-leg by Shardul Thakur. Pant had to walk back for a 12-ball 25 as the score read 120/3.

Colin Ingram didn't bother the scorers much as he was dismissed by Bravo in the same over for just 2 and it was all about looking to play catch-up after that for DC.