Would Be an Absolute Crime to Cricket if Virat Kohli Is Removed From Captaincy, Says Graeme Swann

Despite failing in the World Test Championship final, Virat Kohli has been India's most successful Test captain with 33 wins. 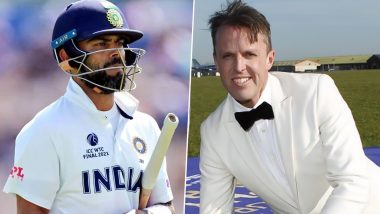 Former England all-rounder Graeme Swann spoke out in support of under-fire Indian captain Virat Kohli, saying that it would be 'absolute crime' in cricket to remove him from captaincy. Kohli's captaincy has been under the scanner ever since India lost the World Test Championship final to New Zealand two days ago. Some drew comparisons and differences between his captaincy and that of former India cricketer Mahendra Singh Dhoni while some called for his removal as India's Test skipper. But Swann didn't seem to entertain this idea at all. Virat Kohli Reacts After Losing ICC WTC 2021 Finals to New Zealand, Indian Captain Says 'We Move Ahead, Together'

"Virat Kohli is an absolute champion and a superstar. He has added steel to the Indian team. You only have to see his passion whenever a wicket goes. (Look at) His face when there is a misfield. He is 100 percent committed to the job," he reportedly said, adding, "To get rid of Virat Kohli at the moment, when you have such a good captain, would be an absolute crime against cricket. I don't think they should look elsewhere. India lost that game because they were underprepared and under-cooked going into that Test match."

While talking about India's performance in the World Test Championship final, Swann felt that they didn't have enough preparations for playing this marquee clash. The last competitive cricket for the Indian cricketers came in form of the Indian Premier League. Despite lots of practice sessions and an intra-squad practice match, it just wasn't enough. New Zealand, on the other hand, played a two-match Test series against England which they won.

"India just had net practice in Southampton. Nothing beats preparing for a Test match like actual Test match play. So New Zealand had everything in their favour when it came to who was going to win that game. That showed during the five days as India looked slightly rusty especially some of the batsmen," Swann said.

(The above story first appeared on LatestLY on Jun 25, 2021 07:34 PM IST. For more news and updates on politics, world, sports, entertainment and lifestyle, log on to our website latestly.com).