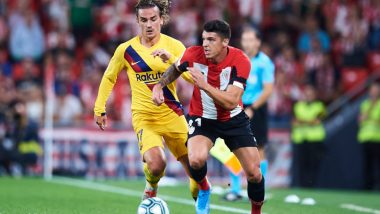 In the previous meeting between the two sides earlier this year, Atletico Bilbao emerged victorious by 1-0 in a contest which was heading towards goalless draw. However, Sergio Busquets’ own goal in the additional time handed Atletico Bilbao victory.

Last year, Athletic Bilbao handed Barcelona 1-0 defeat thanks to Aritz Aduriz’s goal in the 89th minute. A. Capa’s assist made it possible for Athletic Bilbao to go 1-0 up towards the end. Lionel Messi, Antoine Griezmann Involved in Training Ground Altercation After Sevilla Draw, Boss Quique Setien Forced to Intervene.

In the contest that took place last year in February the two sides played out a goalless draw. Barcelona enjoyed the majority of goal possession but failed to score.

The two teams were involved in another draw, but this time both of them opened the scoring. Athletic Bilbao took lead in the 41st minute while Munir El Haddadi after an asset from Lionel Messi drew level for Barcelona.

Barcelona picked up a fine victory in a home game after scoring two goals in the first half. Paco Alcacer and Lionel Messi scored in eighth and 30th minute respectively to hand their side a 2-0 win.

(The above story first appeared on LatestLY on Jun 23, 2020 03:15 PM IST. For more news and updates on politics, world, sports, entertainment and lifestyle, log on to our website latestly.com).