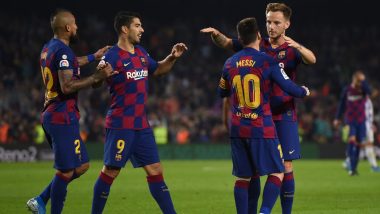 FC Barcelona (BAR) will take on Athletic Bilbao (ATH) in the latest round of La Liga fixtures. BAR vs ATH match will be played at Camp Nou on June 23, 2020 (late Tuesday night). After losing the top spot in the league to Real Madrid, Quique Setien’s men will be hoping to regain the pole position with a win. Meanwhile, fans searching for tips to create Dream11 Fantasy Team for FC Barcelona vs Athletic Bilbao can scroll down below. Lionel Messi, Antoine Griezmann Involved in Training Ground Altercation After Sevilla Draw, Boss Quique Setien Forced to Intervene.

The two sides met on the opening day of the 2019-20 season with Aritz Aduriz scoring a late winner for the home side, but Bilbao will not be able to count on him this time around as the veteran has retired from the game after a need for hip replacement surgery. Yuri Berchiche won’t be available for the visitors as he is suspended. Fans Can ‘Attend’ Barcelona vs Atletico Madrid Clash in La Liga 2019–20 Through Catalan Club’s New Campaign.

Barcelona in the other hand will be without the services of Frenkie De Jong and Sergi Roberto as the duo are still out due to injury. A lot of players from the reserve team have been called up it doesn’t look like any one of them will be given a chance from the start. Antoine Griezmann, who was on the bench against Sevilla is expected to feature in the starting line-up.

Barcelona vs Athletic Bilbao, La Liga 2019-20, Dream11 Team Prediction: Goalkeeper – Marc Andre Ter Stegen (BAR) has kept four clean sheets in a row and should be selected as your keeper for this game.

Lionel Messi is the league’s highest goal-scorer and assist provider and must be kept as your captain while Antoine Griezmann (BAR) can be selected as your vice-captain.

(The above story first appeared on LatestLY on Jun 23, 2020 01:49 PM IST. For more news and updates on politics, world, sports, entertainment and lifestyle, log on to our website latestly.com).