Barcelona vs Athletic Bilbao, La Liga 2019-20: Lionel Messi, Antoine Griezmann and Other Players to Watch Out in BAR vs ATH Football Match 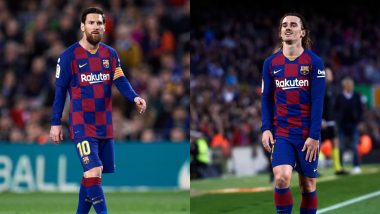 Barcelona will be hoping for nothing less than a win when they host Athletic Bilbao in their next La Liga 2019-20 fixture at Camp Nou on Tuesday. The two-time defending champions’ hopes for a third straight league title took a jolt after they were held to a goalless draw at Sevilla in the previous game. It has left Quique Setien’s side behind Real Madrid in the points table. Anything other than a defeat will reclaim their top position but Lionel Messi and co will certainly eye a win to maintain their unbeaten league streak at home.  Barcelona vs Athletic Bilbao Head-to-Head Record.

In 15 home games in La Liga 2019-20, Barcelona have won 14 and played a goalless El Clasico. But despite their excellent home record, the Blaugrana side will do well to remember the 0-1 defeat they faced against Athletic Bilbao on the opening day of this season. That loss, to an Aritz Aduriz bicycle kick in the 89th minute, was just the first of two games they have lost against the Basque club this campaign. Barcelona vs Athletic Bilbao, La Liga 2019–20 Free Live Streaming Online & Match Time in IST.

Barcelona were also beaten by Athletic in the Copa del Rey quarter-finals. This time they fell to another stoppage-time own goal from Sergio Busquets. Gaizka Garitano’s side are also unbeaten in their last three league matches against Barcelona. As Barcelona and Athletic Bilbao face-off at Camp Nou in what could a crunch fixture for both sides, take a look at some key players for the game.

One day shy of his 33rd birthday, Lionel Messi stares at history. A goal at home against Athletic Bilbao will make the Argentine only the seventh player in history to record 700 career goals. The Barcelona talisman currently has 699 goals for Barcelona (629) and Argentina (70) in his senior career and could reach the 700-goal mark with a strike against Bilbao. He is also the leading goalscorer (21) in La Liga this season and will be eager to add more to his stride after a blank against Sevilla.

The World Cup-winning Frenchman started off the bench against Sevilla and came on for the final 15 minutes. He had to watch from the stands as his side failed to find the target leaving them behind in the league title race. Griezmann was also reportedly involved in a training brawl with Messi a day after the stalemate and things got so worse that both the players had to be separated by coach Setien before matters escalated quickly. Griezmann has endured a difficult debut season at Barcelona will be eager to prove a point.

Like Messi, Inaki Williams will also be making history if he features against Barcelona on Tuesday. The 26-year-old striker may have not enjoyed a great campaign this season but has been consistent and injury-free throughout his time at the Basque club.

If he starts against Barcelona, Williams will be making his 150th consecutive appearance for Athletic Bilbao without missing a single game. He has scored only six times in the league this season but has great memories against Barcelona having knocked them out of the Copa del Rey quarters after forcing an own goal from Busquets.

The 17-year-old has already scored five times in 17 appearances, which includes the winner in the 2-0 victory over Leganes. But despite all those stats, Fati is yet to become a regular for Setien. He scored against Leganes but was not used against Sevilla. If given the opportunity against Athletic Bilbao, he would want to prove his worth again.

(The above story first appeared on LatestLY on Jun 23, 2020 05:41 PM IST. For more news and updates on politics, world, sports, entertainment and lifestyle, log on to our website latestly.com).